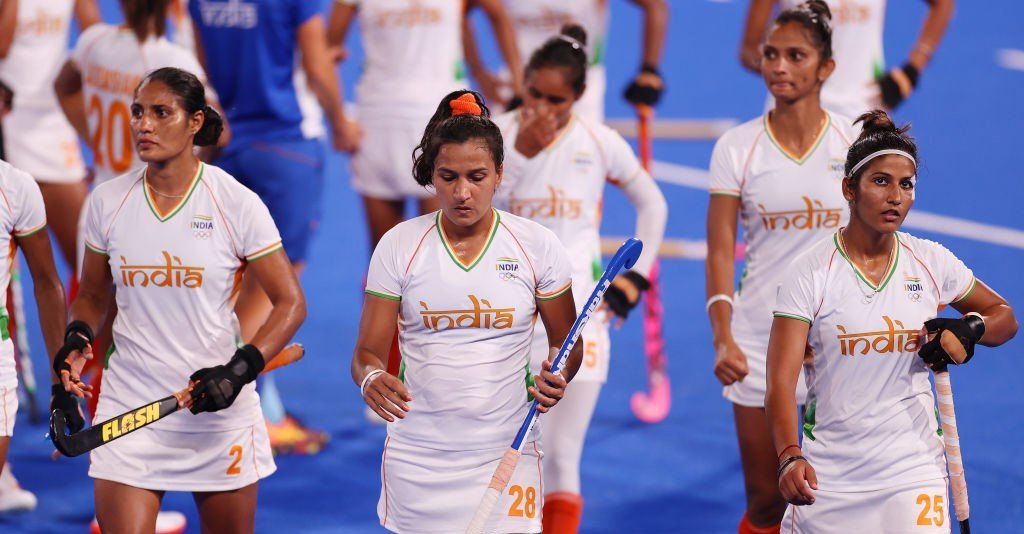 Gurjit Kaur, Rani and Navneet Kaur of Team India leave the pitch following a loss in the Women’s Semifinal match between Argentina and India on day twelve of the Tokyo 2020 Olympic Games at Oi Hockey Stadium on Aug. 4, 2021 in Tokyo, Japan. (Dan Mullan/Getty Images)

India has a spectacular history in the sport, but it mostly has been on the men’s side. The men won Olympic gold seven times between 1928 and 1964 and again in 1980.

India’s women had only qualified for the Olympics twice before. They finished fourth in 1980 and 12th in 2016.

Gurjit Kaur scored for India in the second minute to provide hope, but Argentina’s Maria Noel Barrionuevo responded with two goals to push India into the bronze medal match Aug. 6 against Britain.

India will be motivated to win the first medal ever for its women’s team.

“An Olympic medal is a medal,” India forward Rani said. “If you win gold, that is nice, but still bronze is a medal, so we will fight for that medal and we will focus on the next match.”

India’s 1-0 win over Australia in the quarterfinals Aug. 2 was a stunner. Australia had been dominant up to that point, finishing pool play with a 5-0 record and outscoring its opponents 13-1. India went 2-3 in pool play and needed Ireland to lose the very last game of pool play just to qualify for the quarterfinals.

Now, the team has drawn attention back home.

“It’s going crazy,” India coach Marijne Sjoerd said. “They’re so proud of the girls and the whole nation is behind the girls whatever happens now. I don’t think you can create something more beautiful than that.”

The men will play Germany on Aug. 5 in the bronze medal match. They seek their first medal since 1980.