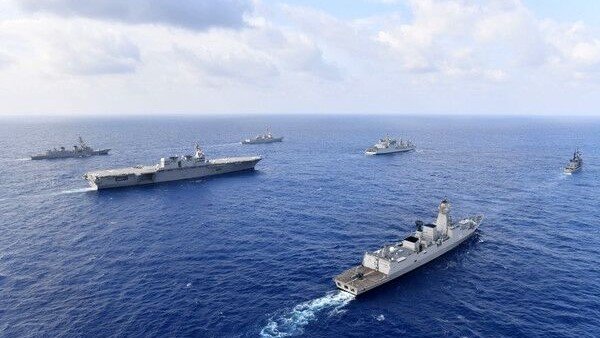 NEW DELHI — India is sending four navy ships for exercises and port visits with the Philippines, Vietnam, Singapore, Indonesia and Australia to strengthen cooperation in the Indo-Pacific region, its navy said Aug. 4, as China’s maritime power grows in the area.

The Indian ships will spend more than two months in the region, the navy said in a statement.

The ships will also participate in a multilateral exercise, MALABAR-21, along with the Japanese, Australian and U.S. navies, the statement said.

It said the exercises will enhance coordination with friendly countries, based on common maritime interests and a commitment to freedom of navigation.

“Besides regular port calls, the task group will operate in conjunction with friendly navies to build military relations and develop interoperability in the conduct of maritime operations,” the statement said.

The U.S., India, Japan and Australia are part of the Quad regional alliance created in response to China’s growing economic and military strength. Washington has long viewed New Delhi as a key partner in efforts to blunt increasing Chinese assertiveness in the Indo-Pacific region.

India is also in a continuing standoff with China over their disputed border in the eastern Ladakh region. The countries have stationed tens of thousands of soldiers backed by artillery, tanks and fighter jets along their de facto border, called the Line of Actual Control.