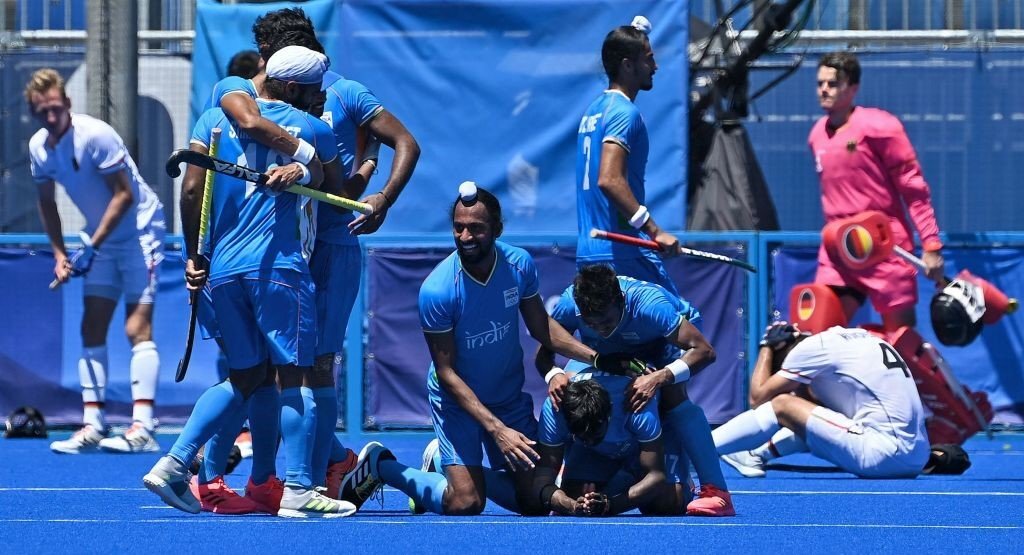 TOKYO – It took 41 years, but the dream of every Indian was finally realized Aug. 5 as the men’s hockey team beat Germany 5-4 to win the bronze medal here at the Oi Hockey Stadium-North Pitch.

The Men in Blue showed absolute resilience, strength, and winning spirit to register a remarkable comeback win against a strong German team. The German team got off the block very quickly in the first quarter after the Indian defense was caught napping. Timur Oruz scored past Sreejesh from the scramble in the D. The European team continued with their relentless pressure and got a series of penalty corners which the Indian defense withheld brilliantly during the dying moments of the first 15 minutes.

Graham Reid’s men responded well in the second quarter as the team scored a brilliant field goal from the counterattack. Nilakanta found Simranjeet with a long ball into the D and he finished the move brilliantly on the turn. Germany soon regained their lead from the goal by Wellen on the counter. After that, the floodgates of goals opened for both teams as Furk capitalized on the error of Surender to give Germany a 3-1 lead in the game.

India again came back in the game as Hardik Singh pounced on Harmanpreet’s drag-flick to peg the Germans one back. In the dying moments of the first half, Harmanpreet Singh again came clutch for India with his superb drag-flick to level the match 3-3.

The second half started with a bang for the Men in Blue as Rupinder Pal Singh converted a penalty stroke and in the preceding phase, Germany lost their referral too. For the fifth goal for India, Gurjant beautifully outran the German defender on the right flank to find Simranjeet in the center as he scored his second of the match.

In the fourth quarter of the match, Windfeder converted the PC as he smashed the ball through the legs of Sreejesh and reduced the lead of India by one goal. But the Indian defenders made sure to give no chance to the German team to create any upset as they saw the match through with that one-goal lead.