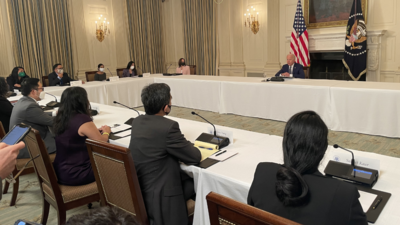 WASHINGTON – President Joe Biden has proposed a comprehensive immigration bill, said White House spokeswoman Jen Psaki Aug. 6 on the administration’s move on ‘documented dreamers’ including children of H1-B visa holders. Speaking at a press briefing, the White House spokeswoman stated that “it’s not current discussions but is something that he would like to address.”

Meanwhile, a delegation of the Asian American and Pacific Islander community Aug. 5 met Biden and Vice President Kamala Harris at the White House to discuss a range of issues including hate crimes and immigration.

Speaking about the H1-B visa issue, executive director of the Indian American organization IMPACT, Neil Makhija, told ANI that he “raised issues of immigration, voting rights and specifically green card backlog in context of explaining how country caps are remnants of exclusionary laws in the past, particularly enacted in the 20s.”

He also told ANI that Biden has an “acute awareness of the unfairness in the system.”

Makhija also raised two bills including the Eagle Act and America’s Children Act and said they will be introduced in the coming days.

Taking about the Deferred Action for Childhood Arrivals, Makhija said, “The second deals we’ve documented dreamers who, like, other dreamers, came here as children, but they had some legal status and so they didn’t qualify for DACA.”

So we encouraged President Biden and the vice president to consider those dreamers, he said.

Relating that Biden started the meeting by saying, “’This is not a one-time thing’, right, he’s starting a conversation with members of our community including on this issue,” Makhija said. “I didn’t ask for that, what we were doing is introducing him, and he was acutely aware of many of these issues already.”

Another major topic of interest to AAPI leaders will be voting rights. Asian Americans increased their voter turnout from 2016 to 2020 more than any other racial or ethnic group, and a majority voted for Biden. Asian American leaders are worried that new, more restrictive voting laws being passed in GOP-led states could erase those gains. The two sides also discussed economic investments in the AAPI community and the COVID-19 pandemic.

AAPI leaders believe the meeting is long overdue given the growing size of the demographic in the United States and its subsequent importance to the Democratic Party.

Attendees from AAPI included roughly a dozen leaders from various outside groups, including the Asian American Justice Center, Asian and Pacific Islander American Vote, and the National Council of Asian Pacific Americans.

India-West Staff Reporter adds: Makhija said in a statement: “We discussed the importance of protecting the right to vote and how South Asian and Asian American communities — which turned out in record numbers in 2020 — are now the target of voter suppression efforts. Protecting voting rights is not only essential for our democracy, but is the bedrock issue that affects every other legislative priority impacting our community.”

The statement added: “The president and vice president heard us loud and clear on immigration and civil rights, two intimately intertwined issues in which our laws determine who gets to become a citizen and who can effectively exercise the rights of citizenship. The president acknowledges that our communities are essential to the fabric of America, but our current laws undermine these values. We urged the president to reform our immigration laws by abolishing green card caps and quotas, and including 200,000 children of long-term visa holders in efforts to protect all Dreamers.”