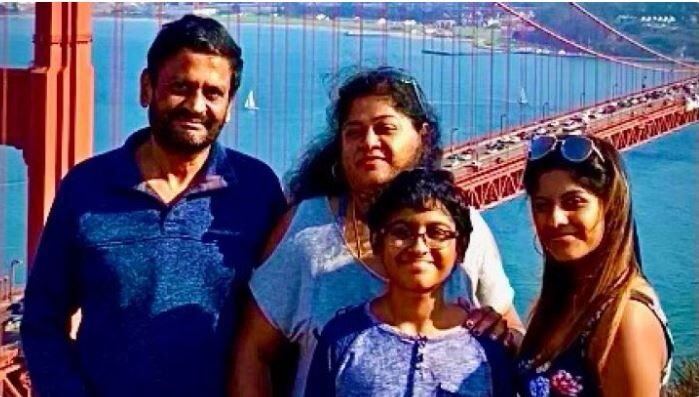 Anthuvan Kuzhandaisamy, an Indian H-1B engineer who was on contract with Apple, abruptly died of a heart attack Aug. 6, leaving his wife and two children vulnerable to immediate deportation to India. He is shown here with his wife Sherene, daughter Anisha, and son Joshua. Indian American Remigius Devasagayam, a long-time friend of Kuzhandaisamy, told India-West his friend’s death highlights the tenuous lives of H-1B families. (family photo via GoFundMe.com)

An Indian H-1B engineer who was in the decades-long queue for a green card, abruptly died of a heart attack Aug. 6, leaving his wife and two children vulnerable to immediate deportation to India.

A final viewing and service for Anthuvan Kuzhandaisamy — who is also known as Anthuvan Sahaya Roy — will be held Aug. 12, 11 a.m., at Alameda Family Funeral and Cremation in Saratoga, California. Kuzhandaisamy will be buried later that day at the Oak Hill Memorial Park in San Jose, California. Services will be livestreamed: https://tinyurl.com/finalfarewelltoanthuvan.

Kuzhandaisamy, who was 48, leaves behind his wife, Sherene Xavier, and two children: Anisha, 19, and Joshua, 12. Both children were born in India.

Kuzhandaisamy hails from Tiruchirappalli in Tamil Nadu. At the time of his death, the SAP engineer was on contract for Apple via DGN Technologies.

All family members are on H-4 visas, as spouses and dependents of the H-1B holder; once the H-1B holder dies, their spouse and dependent children have no legal basis on which to remain in the U.S. Anisha, 19, a sophomore at Arizona State University, could be eligible for an F-1 visa, but then would have to pay exorbitant international student tuition, even though she has lived in the U.S. for most of her life.

Kuzhandaisamy had worked in the U.S. on an H-1B visa for more than 12 years, and had applied for a green card eight years ago.

But the U.S. has a per-country cap on green cards, with more than 7 percent of available green cards allotted to a particular country each year. For immigrants from India, the wait time for a green card can stretch to 80-plus years, by some estimates; many people, like Kuzhandaisamy, have died while stuck in the green card queue.

Reps. Zoe Lofgren, D-California, and John Curtis, R-Utah, on June 2 introduced the Equal Access to Green Cards for Legal Employment (EAGLE) Act of 2021, which aims to phase out the per-country caps. The bill, H.R. 3648, would eliminate the per-country cap over a period of nine years.

“We all know that our immigration system is severely broken, and it has been broken for decades,” said Lofgren, chair of the House Subcommittee on Immigration and Citizenship, in a statement announcing the bill. She noted that the framework of green card allocation has not been updated since 1990. (See India-West’s earlier story: https://bit.ly/3CAByN6)

“The law says Anthuvan’s family has to immediately pack up and leave, which is very unfair,” family friend Joseph William told India-West. “We are trying to see how they can remain here.”

William has organized a fundraiser for the family to help with funeral services, legal services, interim living expenses, and Anisha’s tuition costs. The fundraiser — which can be viewed here: https://www.gofundme.com/f/anthuvans-memorial-fund — had raised almost $69,000 in two days, as of Aug. 9 evening. Kuzhandaisamy was the sole breadwinner for the family: Xavier could not work, because her H-4 work authorization had expired.

“Anthuvan’s sudden death was shocking,” said William, who has known the family for more than a decade. The two met at the Sacred Heart Tamil Catholic Church in Sunnyvale, California, and also worked together.

William noted that Kuzhandaisamy had gone to the hospital last year for a very rapid heart beat, but since then had lost a lot of weight and was in good shape before he died.

“Anthuvan is one of the smartest people I have ever known,” said William. “He was super talented in SAP. I have heard his colleagues say that something that would ordinarily take 10 hours to work out, Anthuvan could solve in 10 minutes.”

William described Kuzhandaisamy as “kind-hearted,” and noted that he was very popular among church members. The engineer had a passion for poetry, and could quickly create verse from a handful of words, said William. “He was fascinated with poetry, and also used to write stories and movie scripts. He wanted to be published one day.”

Remigius Devasagayam, a long-time friend of Kuzhandaisamy who had worked with him at Apple and also attended Sacred Heart Church, told India-West that Anthuvan also headed up the IdhayaOli Foundation, which raised money to provide food to low-income people in India. The Foundation donated thousands of dollars to India last year, amid the pandemic, as the families of day laborers suffered for lack of food.

Devasagayam said he had been in touch with Xavier. “She is absolutely devastated by her husband’s death,” he said, adding that Joshua is too young to understand what has happened to his father.

Xavier’s parents live in Bangalore, but she hopes to remain here. “They have been living here for so long. Their entire life, their friends, are all here. They would need to restart their lives again if they had to move back to India,” said Devasagayam.

Kuzhandaisamy is a graduate of the Birla Institute of Technology and Science, Pilani, and graduated with distinction in 1997. He formerly worked at Infosys and Microsoft.

Devasagayam said Anthuvan’s death highlights the tenuous lives of H-1B families. “Everything is fine until someone expires. And then everything changes in a moment.”