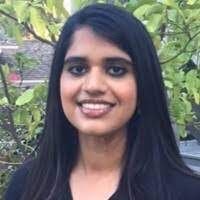 Deputy Chief of Staff for state Sen. Dave Cortese Tara Sreekrishnan was chosen to fill an open seat on the Santa Clara County Board of Education. She was selected over four other candidates, including two Indian Americans. (LinkedIn photo)

The San Jose Spotlight reports that approximately 40 county residents and colleagues of the one-time Cupertino City Council candidate called into the Aug. 4 meeting to support her appointment to Trustee Area 2, which encompasses more than 140,000 people across Cupertino, Los Gatos, Saratoga and parts of Sunnyvale.

Sreekrishnan, who competed against four other candidates for the job, said her work in supporting environmental literacy initiatives and frequent meetings with youth activists put her in a unique position to engage both students and teachers, the Spotlight said.

“I was less nervous after I took a deep breath and remembered that we’re talking about public education, our students—and those are very positive things to talk about,” Sreekrishnan told San José Spotlight. “I really see the board as serving as our social safety net for students.”

Sreekrishnan is replacing former trustee Kathleen King, who resigned in June to avoid encountering conflicts of interest with her work with the Healthier Kids Foundation.

The other candidates vying for the seat were Mingi Bodine, Anjali Kausar, Sudha Kasamsetty and Kevin Koch, it said.

She said educational recovery will be one of several issues she hopes to tackle in the coming year, noting that remote learning during the COVID-19 pandemic exacerbated student achievements, the Spotlight noted.