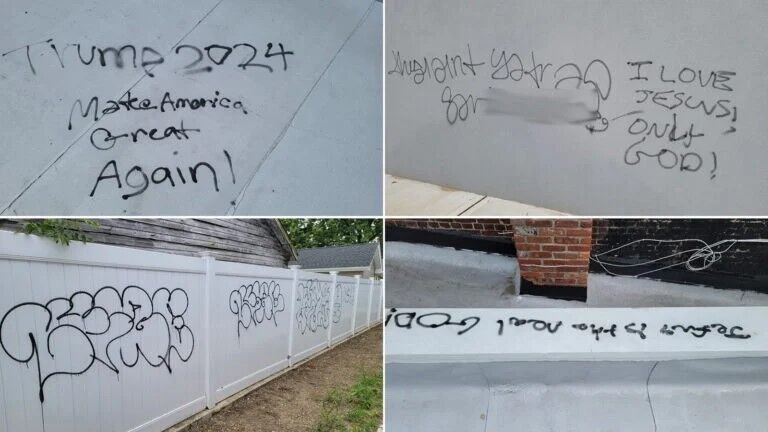 A yet-unidentified vandal spray-painted hate rhetoric on the construction site of a gurdwara being built in New Hyde Park, New York, sometime between Aug. 2 and Aug. 3. “(We) stand in solidarity with the Sikh community who had their Gurdwara vandalized,” said Indian American state Senator Kevin Thomas in a Facebook post. “This act of hate and intolerance against the Sikh community here in Nassau County is heart breaking.” (Facebook photo)

Local community leaders, including several politicians, expressed support for the Sikh American community after vandals attacked the construction site of a gurdwara being built in New Hyde Park, New York, spray painting it with hate speech and racial slurs.

The attack occurred at some point between Aug. 2 night and Aug. 3 morning, days before the ninth anniversary of a mass shooting at the Oak Creek, Wisconsin gurdwara, when avowed neo-Nazi Wade Michael Page fatally shot six people and wounded four others during Sunday morning prayers. Page then killed himself, in the worst mass shooting the Sikh American community has experienced.

According to police and local media reports, the vandal, who is still on the loose, climbed up with a can of black spray paint to pepper hate rhetoric on the Darbar Sri Guru Granth Sahib Ji New York gurdwara’s roof, windows, and exterior fence. The graffiti included messages of support for former President Donald Trump, and used his campaign slogan, “Make America Great Again.”

The graffiti also read “I love Jesus! Only God!” and “this aint ya trap, s**d n**ger.” It unfathomably also included the message “Hi There.”

New York state Senators Kevin Thomas and Todd Kaminsky met with leaders of the Darbar Sri Guru Granth Sahib Ji gurdwara Aug. 6. “(We) stand in solidarity with the Sikh community who had their Gurdwara vandalized,” said Thomas in a Facebook post.

“This act of hate and intolerance against the Sikh community here in Nassau County is heart breaking. We must always choose love over hate. Their resilient response to these attacks embody the Sikh spirit of Chardi Kala—meaning eternal optimism. We stand with our Sikh brothers and sisters,” the Indian American politician said.

“I visited Darbar Sri Guru Granth Sahib Ji New York, which was vandalized last week, with Senator Kevin Thomas to make it clear that we stand with the Sikh community. An attack on one is an attack on us all,” said Kaminsky in a Facebook post.

“Whoever the idiots are responsible for this, the community is going to rally around this. They are not going to succumb to the fear of that situation,” Devane said, as reported by CBS 2 in New York.

The mayor said the village is creating a neighborhood watch group to fight acts of intolerance and make sure everyone in the community feels safe.

Temple officials also issued a statement. “We were deeply saddened to discover hateful messages graffitied all over the site where a new gurdwara is being constructed for our community. Given the bigotry and backlash the Sikh community has experienced in the past, it is impossible not to feel pain in this moment.”

Temple officials are working with the Nassau County Police Department, which is investigating the case.

Temple officials and the Sikh Coalition have asked people to temporarily refrain from visiting the construction site.

The Nassau County Police Department has asked anyone with information to call (800) 244-TIPS, and assured anonymity for all callers.