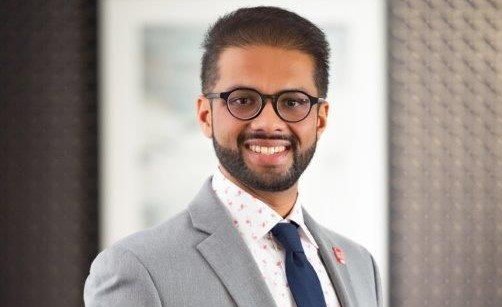 The Asian American Hotel Owners Association earlier this month during its 2021 national convention in Dallas, Texas, honored Bijal Patel with its Advocacy Award.

Patel is the chairman of the California Hotel & Lodging Association for 2020­-2021. The award recognizes the Indian American for guiding numerous successful advocacy initiatives on behalf of hotel owners during “the year of the pandemic.”

“Government officials have a more profound impact than ever on the bottom line of hotel owners,” said Patel in accepting the award, according to an Aug. 11 news release. “Our advocacy activities focus on making sure that hoteliers are helped more and harmed less by the decisions of legislators and regulators.

“I’m honored and humbled that this award salutes the many proactive hours invested by our members and allies,” the award winner added. “Political advocacy is never ‘one and done’ – the issues may change but our mission on behalf of hoteliers always continues.”

An especially notably achievement was the defeat of Proposition 15 on last November’s election ballot in California. This victory prevented an increase in property taxes for business owners in the state that was projected to be double or triple or higher of current rates, the release said.

In just six weeks leading up to the November election, Patel effectively harnessed the collective power of CHLA and AAHOA to join with other pro-business parties who favored low taxes and high growth, it said.

This powerful “rapid response” coalition spent more than $80 million in a statewide “No On Prop 15” information campaign that showed voters why voting “no” was in their best economic interest, the news release added.

The award also recognized Patel’s advocacy work with California Gov. Gavin Newsom, state agencies and state regulators to expedite safe re-opening guidelines for small businesses like hotels; to lift restrictions on meetings of small groups so hotels could regain this important revenue stream; and to get hotel employees vaccinated as essential workers.

AAHOA’s Political Forum Award for Advocacy is presented once a year to an individual who helps advance the interests of hotel owners through political involvement and government affairs, the release notes.

Patel guides CHLA, which is the largest state hospitality group in the U.S., whose members operate almost a quarter million rooms at properties that range in size from small inns to hotels with 3,000 rooms.

He is also CEO and principal partner of Coast Redwood Hospitality, a company based in Northern California that owns and operates a portfolio of hotel and multi-family assets, his bio said.

AAHOA is one of the world’s most respected and influential voices for the hotel industry, with almost 20,000 members who together own 60 percent of all hotels in the United States, according to its study conducted in partnership with Oxford Economics and release Aug. 4.

“The findings laid out in this new study are a testament to the strength and influence of AAHOA members and serve as yet another reminder of hotel owners’ vital economic contributions to communities across the nation,” said AAHOA interim president and CEO Ken Greene. “Guests at AAHOA hotels spend billions of dollars in local economies. AAHOA members employ as many workers as FedEx and Home Depot combined, and the 1.1 million employees who work at

AAHOA member hotels earn $47 billion annually. AAHOA members are the heart and soul of the hospitality industry and will continue to play an essential role in our nation’s economic recovery.”

The study, noted a press release, shows that AAHOA supports a total economic impact of: $680.6 billion of business sales (representing revenue plus sales and lodging taxes); 4.2 million jobs with $214.6 billion of wages, salaries and other compensation; $368.4 billion contributed to U.S. GDP; and $96.8 billion of federal, state and local taxes.