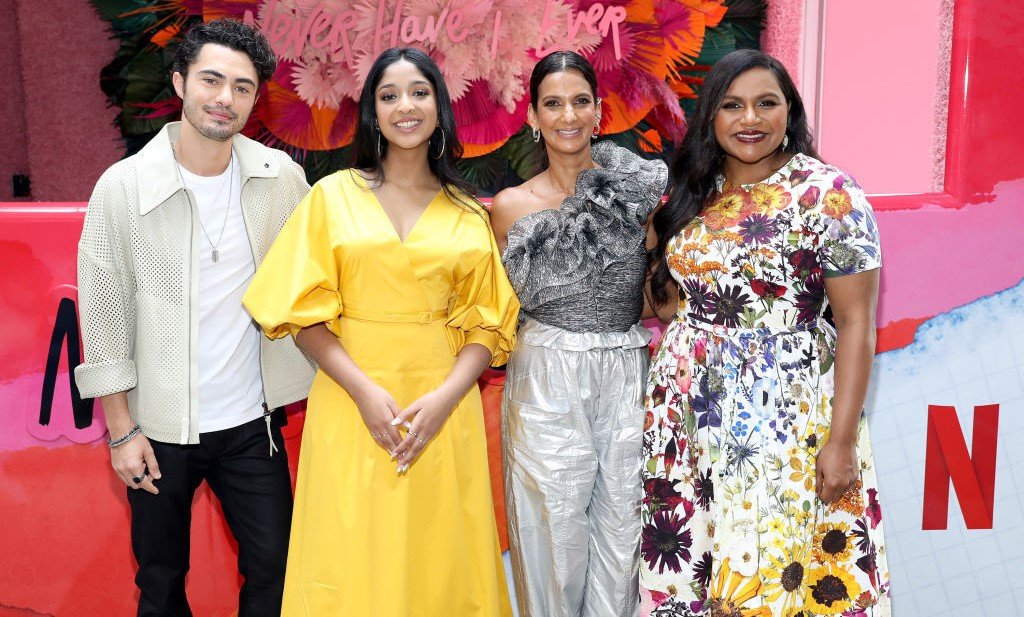 File photo of (l-r)Darren Barnet, Maitreyi Ramakrishnan, Indian Americans Poorna Jagannathan and Mindy Kaling at Netflix’s hosting a mobile truck pop up activation in celebration of the launch of “Never Have I Ever” Season 2 on July 15, 2021 in New York City. (Monica Schipper/Getty Images for Netflix)

The Mindy Kaling and Lang Fisher Indian American-led Netflix comedy “Never Have I Ever” was renewed for a third season Aug. 19.

The renewal comes a month after season two of the series premiered on the streaming giant.

The Hollywood Reporter reports that an episode count and return timeframe have not yet been determined for the high school-set comedy that is inspired by Kaling’s adolescent years.

Maitreyi Ramakrishnan stars in “Never Have I Ever,” which counts Fisher as showrunner, the report said.

“We are so grateful to Netflix and Universal Television for letting us continue to tell this story, and to the fans around the world who clamored to see more of this badly behaved Indian teenager,” Kaling and Fisher said in a joint statement announcing the news, the report notes.

Jaren Lewison and Darren Barnet star as Ben and Paxton, respectively, the love interests for Ramakrishnan’s Devi. Fisher, in an interview in July with THRpodcast TV’s Top 5, said she has no endgame in sight for” Never Have I Ever” but noted that the Ben-Devi-Paxton love triangle would always be central to the comedy, it said.

In season two of this coming-of-age comedy, Devi continues to deal with the everyday pressures of high school and drama at home, while also navigating new romantic relationships.

Season two, which bowed July 15, currently has a 93 percent rating among critics and an 86 percent score among viewers. Netflix, like other streamers, does not release actual viewership data, THR reports.

Poorna Jagannathan, Richa Moorjani, Lee Rodriguez and Ramona Young co-star in the comedy, which counts John McEnroe as its narrator.