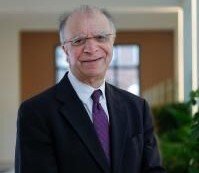 President Joe Biden will forward a pro-immigration agenda, and has already reversed many of the hardline immigration policies of his predecessor, said Indian American Migration Policy Institute senior fellow Muzaffar Chishti (above) at a press briefing Aug. 7. However, arrests at the U.S.-Mexico border have dramatically spiked. (photo courtesy of the Migration Policy Institute)

Chishti compared Biden’s record to that of former President Donald Trump, who had taken a hardline, anti-immigration stance during his four years in office, issuing 450 executive actions, which included: travel bans on Muslims from certain countries, ending the Deferred Action for Childhood Arrivals program which provided relief for deportation for more than 800,000 undocumented young people, and activating the public charge rule.

In business immigration, the Trump administration modified the criteria for those seeking H-1B visas, and unsuccessfully attempted to terminate work authorization for H-1B spouses.

“This was a presidency on steroids,” said the Indian American Chishti, who serves as director of MPI’s office at New York University’s School of Law.

On his first day in office, Biden enacted seven pro-immigrant policies, rolling back Trump’s Muslim ban, reinstated DACA with a promise to preserve and expand the program, and paused construction on the border wall, Trump’s multi-billion dollar project to keep out migrants from South and Central America. He also cancelled Trump’s “third country rule,” which required migrants to remain in Mexico until their asylum claims were heard.

However, arrests at the border have dramatically spiked. The Border Patrol made about 200,000 arrests at the southern border in July, the most number of arrests for a single month in 21 years. More than 19,000 unaccompanied minors and 76,000 families attempted to cross the border.

More than 47 percent of those who were apprehended were immediately returned to Mexico under a new statute known as Title 42, which was initiated at the start of the Covid pandemic in March 2020 with the aim of preventing the spread of Covid. The Biden Administration has retained Title 42, which does not allow migrants to apply for asylum before they are returned to Mexico.

The crisis at the border is steamrolling much of Biden’s agenda, said Chishti, as Republican members of Congress and even state governors have declared that nothing more can go on until the border crisis is resolved.

Biden also re-defined deportation priorities for those already in the U.S., noting that only those who had committed high crimes would be subject to removal. MPI estimates that more than 87 percent of the undocumented population in the U.S. are protected from deportation with Biden’s order.

“(Undocumented immigrants) who are not criminals can leave their home in the morning and be reasonably sure they can come home at night and see their kids, which we could not guarantee during the Trump Administration. That is an existential change in the lives of 11 million people,” said Chishti, noting that the number of arrests and detentions have gone down dramatically.

Undocumented families in detention typically faced an incarceration period of more than 60 days. But Chishti noted that time has now gone down to less than one week.

Asked by India-West about the Trump Administration’s record of long wait times for asylum seekers held in ICE detention who were seeking bond hearings, along with almost no one being released on bond despite passing credible fear interviews, Chishti said he believed bond hearings would start up again with the new administration in place.

“I think on the individuals in detention, there is much more work to be done, but individual detentions have gone down, I think by about half,” he said.

Long detention times did not begin with the Trump Administration. Many asylum seekers from India — primarily Sikhs — began hunger strikes in 2015 to protest long detentions in ICE custody, as they awaited bond hearings. Surprisingly few asylum cases were granted for Indians between the years 2014 and 2018, according to an India-West analysis of ICE data. (See earlier story: https://bit.ly/3AZB15P)