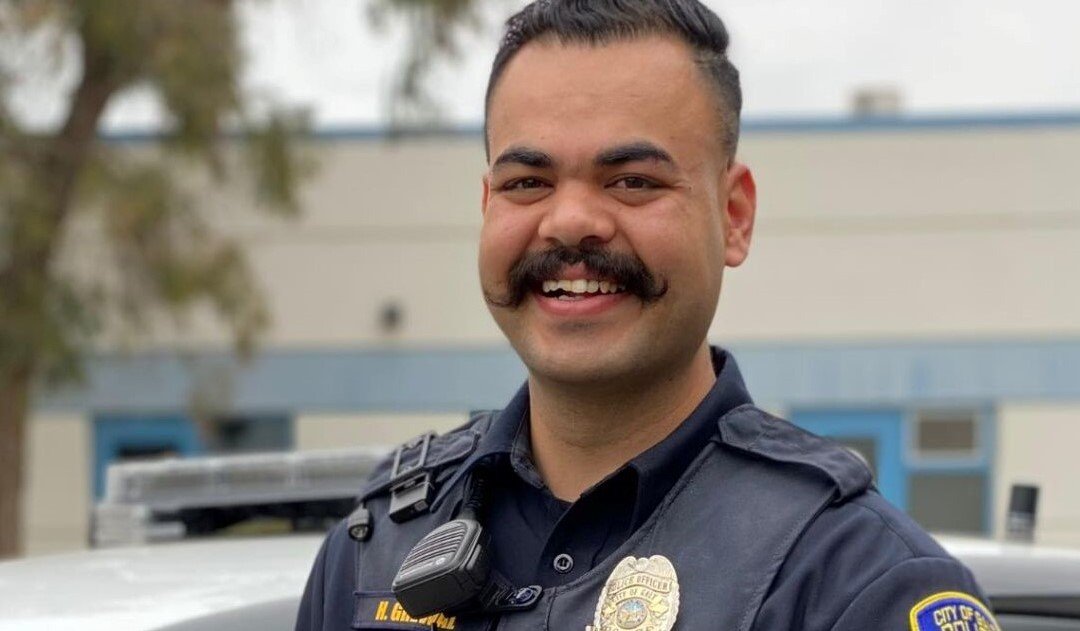 Galt, California police officer Harminder Grewal was involved in a major traffic collision Aug. 22 — while en route to help crews with the Caldor Fire in Northern California — and succumbed to his injuries Aug. 26. A memorial service is being held to honor the 27-year-old Indian American on Sept. 2 evening, on the steps of the Capitol Building in Sacramento, California. (Galt Police Department photo)

A memorial service will be held Sept. 2 evening on the north steps of the Capitol Building in Sacramento for Galt Police Officer Harminder Grewal, who died while on his way to help crews with the Caldor Fire in Northern California.

“Our community mourns the death of Officer Grewal,” Sgt. Mahavir Kallirai of the U.S. Marine Corps told India-West. Kallirai is one of the organizers of the memorial, and said he was currently working to get the state Legislature to honor Grewal’s service to the community.

“If it wasn’t for people like Officer Grewal, people would not have the passion for serving in uniform. He is literally an inspiration,” said Kallirai.

Grewal, who was only 27 at the time of his death, leaves behind his parents, Gurdip and Jaswinder Grewal; his brother and sister-in-law Jasdeep and Kirandeep Grewal; and sister Nandeep Sidhu. The Indian American officer had served with the Galt Police Department for two and a half years.

Kallirai and Grewal went to college — the San Joaquin Academy — at the same time, but did not know each other then.

“I have an enormous respect for service members and the sacrifices they make every day,” said Kallirai.

A memorial fund has been set up in Grewal’s honor: https://cahpcu.org/OfficerHarminderGrewalMemorialFund.

Galt Interim Chief of Police Richard Small told India-West: “Officer Grewal was by far one of the most well-liked, well-respected officers in the department. He had a personality that drew others to him.”

Grewal was the “Officer of the Year” for 2020, and also received an award last year from the organization Mothers Against Drunk Driving for logging the second-highest number of DUI arrests, said Small.

According to a report by the California Highway Patrol, Grewal and his colleague, Officer Kapri Herrera, were driving early morning Aug. 22 to help crews with the Caldor Fire in El Dorado, California, which has forced evacuations for thousands of people and burned almost 200,000 acres.

At 4:35 a.m. that morning, the Sacramento CHP received a call of a two-vehicle head-on collision which occurred on northbound Highway 99. Based on preliminary information obtained at the scene, officers determined that a Dodge Ram pick-up was traveling at an unknown rate of speed on southbound Highway 99 when it collided with the center median. The Dodge broke through the center median concrete barrier and entered the northbound lanes where it collided head-on with Grewal and Herrera’s police vehicle.

The driver of the Dodge Ram sustained fatal injuries and was declared deceased at the scene by the Cosumnes Fire Department. He was identified as Manjot Singh Thind of Manteca, California.

Grewal and Herrera sustained major injuries. Both had to be extricated from the patrol car. They were then transported to UC Davis Medical Center. Grewal succumbed to his injuries Aug. 26 at Kaiser Medical Center.

Several police officers in a car and motorcycle procession drove Grewal’s body from Sacramento to Lodi, California, on Aug. 28 morning.

Herrera remains hospitalized with major facial injuries, but is expected to survive, according to Galt police. A fund has been set up to help with her medical expenses: https://porac.org/fundraiser/officer-kapri-herrera-medical-fund/

The collision will be investigated by the South Sacramento CHP Area and the Valley Division Multidisciplinary Accident Investigation Team.

It is unknown at this time if alcohol and/or drugs were a factor in the collision, according to the CHP report.

Small told India-West there was nothing to indicate anything other than a freak accident. “There is no indication that this was intentional,” he said.

“It is with profound sadness and a heavy heart that we share the news that Officer Harminder Grewal succumbed to his injuries on Thursday, August 26, 2021, following a head-on traffic collision with another vehicle that sent him and his partner to the hospital on Sunday, August 22, 2021. He made the ultimate sacrifice while performing his duties as a public servant, responding to danger.”

“Officer Grewal took pride in serving his community and his work ethic was contagious to all who worked with him. His service to our community will never be forgotten.”

Several police departments from around the state offered their condolences on the Galt Police Department’s Facebook page. “Absolutely heart aching,” wrote the Sunnyvale, California Police Department. “We send our heartfelt condolences to his family, friends, and colleagues. We mourn your hero’s loss alongside you. Rest In Peace, Officer Grewal. Your service and sacrifice will not be forgotten.”