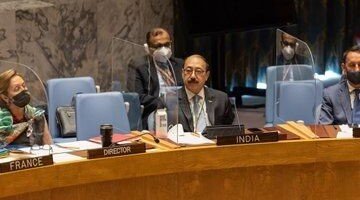 UNITED NATIONS – The UN Security Council has demanded that the Taliban should not allow terrorists to use its territory for attacks against other countries and this would apply to the Lashkar-e-Taiba and the Jaish-e-Mohammad, according to India’s Foreign Secretary Harsh Vardhan Shringla.

The resolution was adopted Aug. 30 under India’s presidency by a divided Council where China and Russia were the outliers who abstained on the vote on the resolution, but refraining from vetoing it in view of the overwhelming global support for the sentiments behind it.

All the other 13 members voted for it.

India played a “constructive and bridging” role at the Council and worked to the “extent possible for consensus-based” outcomes, Shringla said, and this diplomacy was evident in saving the resolution proposed by the U.S., Britain and France from a veto by China and Russia, even as they expressed their opposition.

The resolution also demanded that the Taliban uphold human rights, provide safe passage to those who want to leave Afghanistan and allow humanitarian aid.

Shringla said that India was “extremely happy” with the resolution as it “highlights the will of the council to take necessary steps that are very important for the international community in its engagement with Afghanistan.”

The council action came while the clocks 10,000 km away in Afghanistan rolled past midnight into Aug. 31, the deadline President Joe Biden had set for his country’s withdrawal from there, and the last C-17 aircraft took off from Kabul International Airport.

“Tonight’s withdrawal signifies both the end of the military component of the evacuation but also the end of the nearly 20-year mission that began in Afghanistan shortly after Sept. 11, 2001,” declared General Kenneth McKenzie, commander of the US Central Command.

At the UN, Shringla said, “I want to highlight the fact that the resolution makes it very clear that Afghan territory should not be used to threaten or attack any other country. In particular, it also underlines the importance of combating terrorism.”

“It also refers to those individuals and entities been designated under Security council resolution 1267 (as terrorists)”, he said, adding, “And in that context I may mention that the LeT and the JeM, are UN Security Council proscribed entities, terror entities that need to be called out, and condemned in the strongest possible terms.”

The council is “unequivocal” on terrorism, he said. The resolution said that Afghanistan “not be used to threaten or attack any country or to shelter or train terrorists, or to plan or to finance terrorist acts.”

“And I think that also reflects the views of council members, as we understand it from the discussions,” Shringla said.

US Permanent Representative Linda Thomas-Greefield told reporters, “The Security Council reiterates its enduring call on the importance of counter-terrorism.”

“Afghanistan can never again become a safe haven for terrorism,” she said.

While the council expects the Taliban to allow those who want to leave, she said that “this resolution also affirms the Security Council’s enduring commitment to those who remain,” adding that “we cannot airlift an entire country to safety. This is the moment where diplomacy has to step up.”

“We need to ensure Afghanistan respects the inalienable rights of its people e including women, girls, and minorities,” she said.