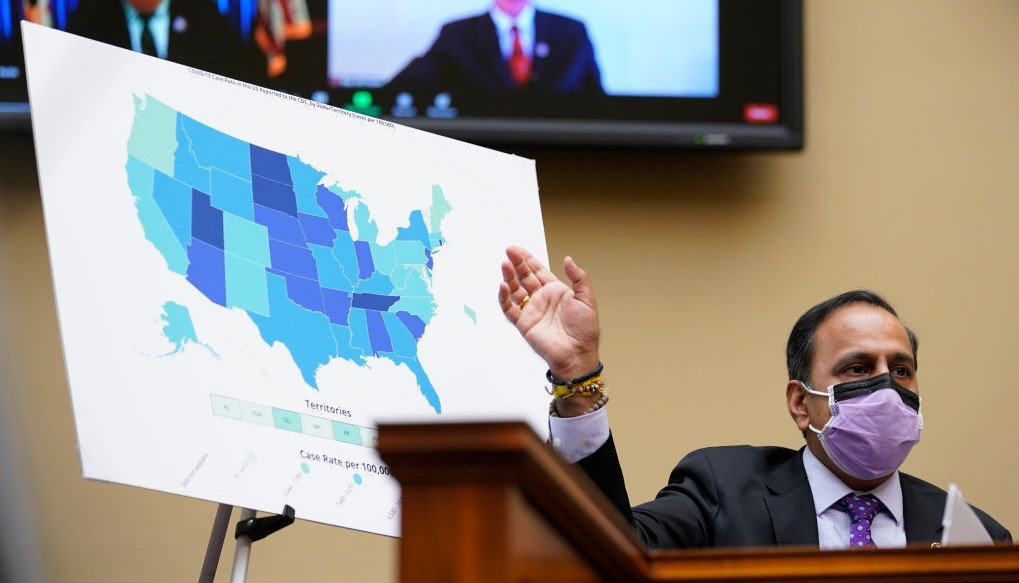 File photo of Indian American Congressman Raja Krishnamoorthi displaying a report during a House hearing on Capitol Hill in Washington on May 19, 2021. Krishnamoorthi led 40 colleagues Aug. 31 in sending a letter to Congressional leadership calling for an end to employment-based Green Card backlogs for individuals such as H-1B holders, which was also signed by Representatives Pramila Jayapal and Ro Khanna. (Stefani Reynolds-Pool/Getty Images)

U.S. Reps. Raja Krishnamoorthi, Kathy Manning and Deborah K. Ross led a coalition of 40 colleagues in sending a letter to the Congressional leadership Aug. 31 calling for an end to employment-based Green Card backlogs as part of a reconciliation package.

The letter, send to House Speaker Nancy Pelosi and Senate Majority Leader Chuck Schumer, requested that the budget reconciliation package provide relief to the 1.2 million individuals stuck in the employment-based green card backlog, strengthening our economy in the process.

Under the current system, no more than 7 percent of employment-based green cards are available to individuals from a single country. As a result, individuals from countries with large populations – such as India and China – face decades-long wait times to achieve lawful permanent resident status, according to the news release issued by Krishnamoorthi’s office.

In order to fully unlock the economic potential of high-skilled immigrants, a pathway to lawful permanent residence must be cleared and the system must be reformed. Reforming this immigration system will be especially helpful to the United States as its economy and workforce continues to recover from the pandemic, it said.

“Failure to provide a path to lawful permanent residence for the 1.2 million people in the employment-based green card backlog, most of whom are H-1B visa holders, would be tantamount to staging an economic recovery with one hand tied behind our back,” the representatives wrote in the letter.

“Permanently relegating H-1B holders to nonimmigrant status while China, Russia, and other major powers are ascendant on the world stage – and hungry to be home to the innovators of the 21st century – is simply nonsensical. This can and must be addressed in the budget reconciliation package currently under negotiation,” it added.

As a co-chair of the Congressional Asian Pacific American Caucus Immigration Task Force, Krishnamoorthi (D-Illinois) has remained committed to advancing immigration reform throughout his time in Congress, including as an original cosponsor of the Fairness for High Skilled Immigrants Act, which passed the House last Congress, the news release notes.

Among the other signatories of the letter sent to Pelosi and Schumer were Reps. Pramila Jayapal, D-Wash.; and Ro Khanna, D-Calif.