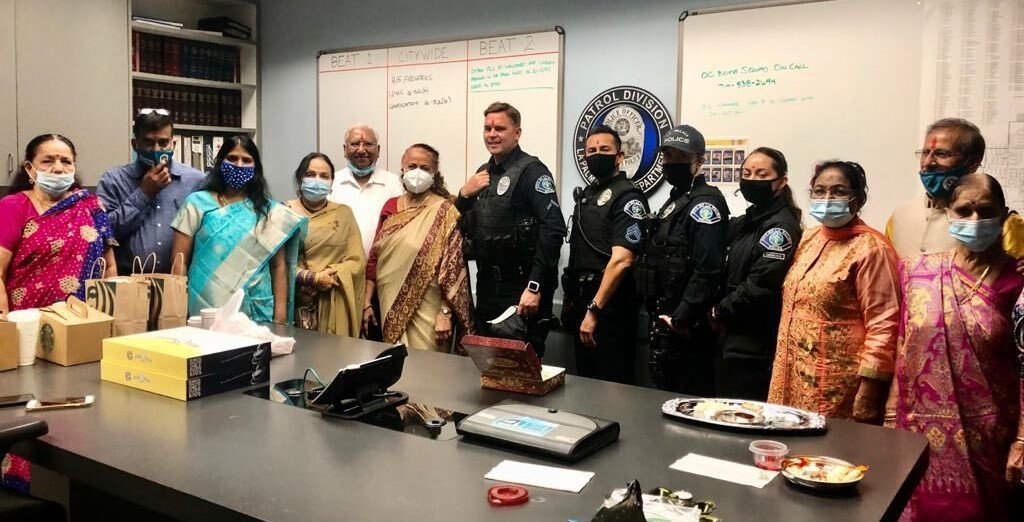 Members of VHPA-LA and co-organizers Excel Foundation explained the significance of the Hindu festival to the officers: sisters tie a sacred thread known as “rakhi” on the wrists of their brothers and pray for their well-being, brothers in turn vow to protect their sisters for life.

In India, the festival is also observed with the defense and police forces, in recognition of the fact that they are deployed in working for the country and its people. The La Palma officers present were thanked for doing exactly the same and protecting the public.

VHPA-LA president Keshav Patel chanted a sacred hymn asking for the protection of the police. The police officers, said a press release, impressed with the meaning and purpose of the “Raksha Bandhan” tradition, happily extended their wrists for the tying of the sacred band. Wishing them a long life and safe life, the women, led by Charu Shivakumar, president of Excel Foundation and vice president of VHPA-LA, also lit candles, offered sweets and put red vermillion “tikkas” on their foreheads.

The aim of engaging with the police, a VHPA-LA press release said, was to create awareness of Hindu traditions including its expansiveness and planting seeds of cooperation.

Kewal Kanda, VHPA-LA, public relations, thanked Terry Kim, La Palma police chief, for giving the go ahead for the ceremony and the officers present for their participation in the old Hindu tradition.