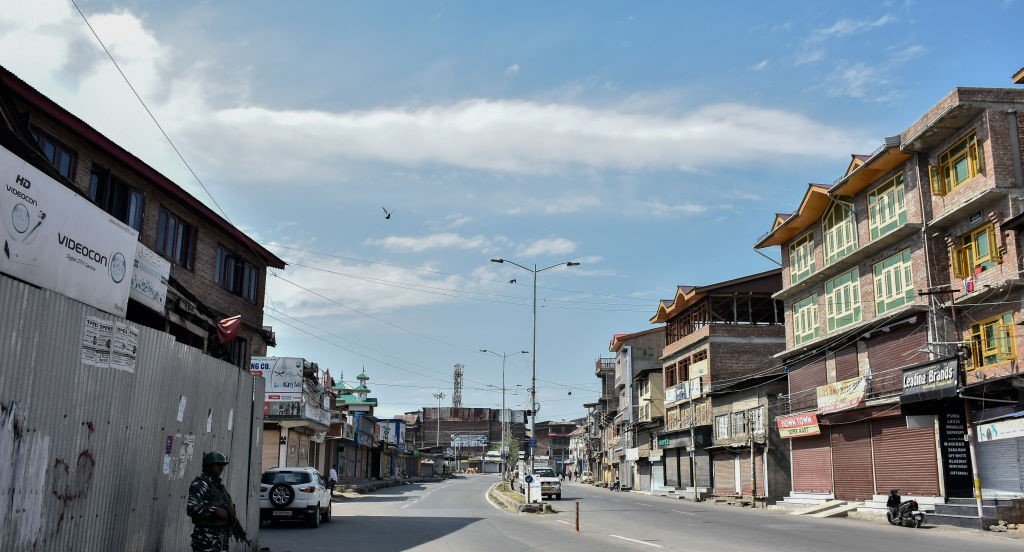 A policeman stands alert on a deserted road during restrictions imposed following the death of Syed Ali Shah Geelani, in Srinagar. Authorities on Sept. 5 eased some restrictions that had been imposed since Geelani’s death. (Saqib Majeed/SOPA Images/LightRocket via Getty Images)

Geelani, who died Sept. 1 at age 91, was the emblem of Kashmir’s defiance against New Delhi and had been under house arrest for years.

His son, Naseem, said Indian authorities buried Geelani’s body in a local cemetery without any family members present after police snatched his body from the home. Police denied that and called it “baseless rumors” by “some vested interests.”

A video widely shared on social media purportedly showed Geelani’s relatives, mostly women, frantically trying to prevent armed police from forcing their way into the room where his body, wrapped in a Pakistani flag, was being kept. It showed women wailing and screaming as police took the body and locked his family and relatives inside the room.

Police said they registered a case against unspecified family members and some others Sept. 4 and began probing the case under the Unlawful Activities (Prevention) Act. They have not yet been taken into custody.

Geelani’s son Naseem said Sept. 5 that a police officer visited the family on Saturday and informed them a case had been registered. Naseem did not provide further details about the meeting, but said there were scuffles as the police removed his father’s body.

“Amid the chaos, we didn’t really know what was happening. We were mourning,” said Naseem.

Meanwhile on Sept. 5, authorities eased some restrictions that had been imposed since Geelani’s death, allowing private vehicles on roads and vendors to operate in some parts of Srinagar. However, most shops and businesses stayed closed as government forces patrolled roads and streets in the city.

Mobile phones were restored late Sept. 3, but mobile internet and restrictions on the assembly of people continued in many parts of the Kashmir Valley.

Paramilitary soldiers remained stationed outside the graveyard where Geelani was buried.