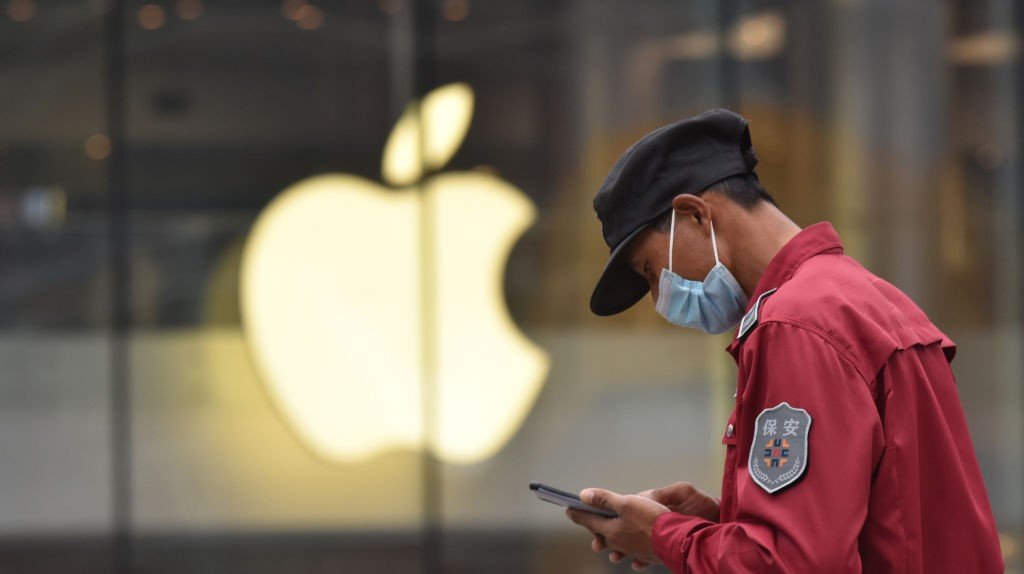 A security guard looks at his smartphone as he walks past Apple’s flagship store Sept. 15, 2021 in Beijing, China. At the Apple iPhone 13 launch event Sept. 14, the company showcased a promotional video featuring the iconic RD Burman song “Dum Maro Dum.” (An Xin/Costfoto/Barcroft Media via Getty Images)

WASHINGTON – Tech giant Apple’s idea of giving a Bollywood touch to the launch of one of its much-awaited smartphone series, iPhone 13, has taken social media into a frenzy.

After months of rumors and leaks, Apple held its highly anticipated event Sept.14 and unveiled a slew of products including the iPhone 13, Apple Watch Series 7, an all-new iPad mini, and more, in Cupertino, California. While the new tech developments and advancements in the new models took the front seat, it was the Bollywood twist used by the company that has taken social media ablaze.

As per the viral videos, the song played in the ad is a modified version of the song.

Soon after the video went viral, Twitter was flooded with fans going gaga over the tech giant’s idea of including the Bollywood twist in the promo.

One user wrote, “Nice to see legendary Bollywood song being used in the #iPhone13 commercial. #DumMaroDum.”

The company shared the video on YouTube with the iPhone 13 description that read, “Featuring Water Resistance, Ceramic Shield, that’s tougher than any smartphone glass. New Cinematic mode, which adds shallow depth of field to your videos and shifts focus automatically. Superfast 5G. The A15 Bionic chip. Even longer battery life. And improved Night mode.”

The commercial video shared by Apple on YouTube shows a young delivery boy bustling through the city on his motorbike to deliver packages to customers. The recreated version of the iconic song plays in the background as he rides his bike while mapping the roads with his brand new iPhone 13. The man endures every challenge that comes his way to deliver the packages.