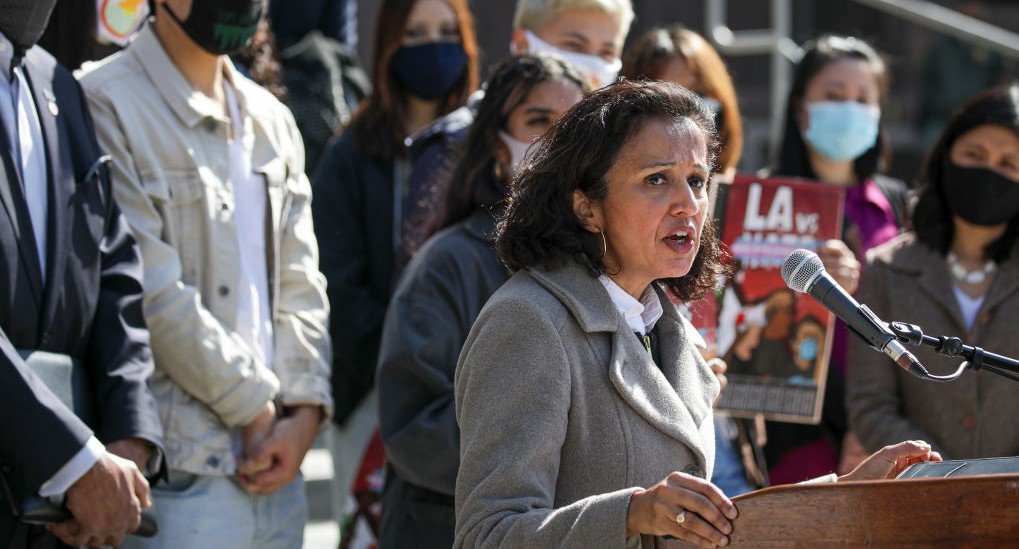 Manjusha Kulkarni, Asian Pacific Planning and Policy Council executive director, speaks against the hate and recent violence perpetrated against Asian Americans, at a rally held on the steps of the County Hall of Administration March 17, 2021 in Los Angeles, California. Referring to being included in Time’s list, the Indian American activist told India-West, “The award was unexpected.” (Irfan Khan/Los Angeles Times via Getty Images)

Kulkarni and Stop AAPI Hate co-founders Cynthia Choi and Russell Jeung were named in the “Icons” section of the list, alongside Prince Harry and Meghan Markle, pop singers Britney Spears and Dolly Parton, Sherrilyn Ifill, president and director-counsel of the NAACP Legal Defense and Educational Fund; and Russian opposition leader Alexie Navalny, among others.

“In a turbulent year, as the U.S. has seen a surge in racist, anti-Asian attacks—from terrifying assaults on senior citizens to the tragic mass shooting in Atlanta—no coalition has been more impactful in raising awareness of this violence than Stop AAPI Hate.” wrote poet Kathy Park Hong, in Time Magazine’s tribute to the founders of Stop AAPI Hate.

“Since its start, the organization has logged more than 9,000 anti-Asian acts of hate, harassment, discrimination and assault across the country,” Hong said, noting that the Web portal allows Asian Americans and Pacific Islanders to file firsthand accounts of racism they had experienced.”

“(These) types of incidents that have long haunted our communities but gone unreported by government agencies and the media and unnoticed by others,” wrote Hong, adding: “Stop AAPI Hate has become not only an invaluable resource for the public to understand the realities of anti-Asian racism, but also a major platform for finding community-based solutions to combat hate.”

“And its leaders have locked arms with other BIPOC organizations to find restorative justice measures so that civil rights—for all vulnerable groups—receive the protection they deserve,” wrote Hong.

The portal allows victims of hate crimes and bias-motivated incidents to report the attack in one of several languages, including Hindi, Punjabi, and Urdu.

“The award was unexpected,” Kulkarni told India-West. “I feel gratified that the hard work of so many individuals and organizations has been recognized.”

“This represents the strength of our community members who bravely shared their stories with us. My hope is that we’re embarking on a movement, bringing all parts of our community together,” she said.

Kulkarni, who is also the director of the Asian Pacific Policy and Planning Council, noted that South Asian Americans have been the targets of hate crimes ever since the Sept. 11, 2001 terrorist attacks, which killed almost 3,000 people. Sikh American Balbir Singh Sodhi was the first target of a post 9-11 hate crime: the gas station owner in Mesa, Arizona was fatally shot by Frank Roque, who mistook him for a Muslim and wanted to get revenge for the attacks.

In the post 9-11 years, South Asian Americans have also been the targets of racial profiling by law enforcement, and also with policies at the federal level, said Kulkarni.

“We share the experiences of our African American and Latinx brothers and sisters. Unfortunately, we are the targets of white supremacy, which has prevented us from getting the opportunities we deserve,” she told India-West.

The hate violence against the community has lessened somewhat as President Joe Biden took office and declared that AAPI hate would not be tolerated. However, said Kulkarni, the Biden administration has — to a lesser extent — engaged in some finger-pointing regarding the Covid-19 pandemic, as did his predecessor Donald Trump. Specifically, Biden asked the intelligence community to look into rumors of the coronavirus being released by a lab in China.

“He gave credence to outrageous claims which could put people at harm,” stated Kulkarni.

Modi, Banerjee, and Harris were listed in the Leaders section of the list, alongside Biden, Trump, journalist Tucker Carlson, Stacey Abrams, who narrowly lost her bid to become the governor of Georgia; Congresswoman Liz Cheney, a Republican from Wyoming who supported the impeachment of Trump; Centers for Disease Control director Rochelle Walensky; and White House Chief of Staff Ron Klain, among others.

Poonawalla was listed in the Pioneers section, alongside singer Billie Eilish, attorney Ben Crump, who represented George Floyd’s family in a wrongful death suit, and several others.