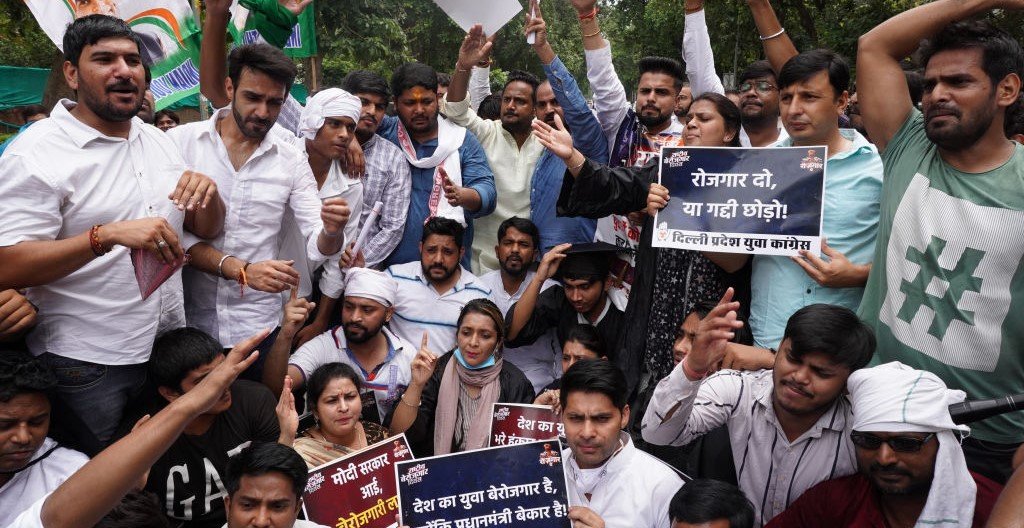 Activists of the Indian Youth Congress party shout slogans as they take part in a protest against the rising unemployment while marking Prime Minister Narendra Modi’s 71st birthday as the ‘National Unemployment Day’ in New Delhi, India on Sept. 17, 2021. (Mayank Makhija/NurPhoto via Getty Images)

About 150 Congress supporters marching behind a large banner reading “Government, Give Jobs to Youth” tried to jump police barricades blocking them from marching to government offices in New Delhi.

Police seized some protesters and took them away in a bus. They were expected to be released later that day.

The Center for Monitoring the Indian Economy, a private think tank, says in August 2021, India’s unemployment rate stood at 8.32% and youth unemployment was around 27.7%.

J.P. Nadda, the president of Modi’s Hindu-nationalist Bharatiya Janata Party, described Modi as a reformer who cares about social issues.

A massive 23.9% economic contraction in the April-June quarter last year due to the pandemic lockdown caused millions of people to lose their jobs in small and medium-size businesses and pushed the country into a recession.

The International Monetary Fund has predicted 9.5% economic growth for India in the current financial year.