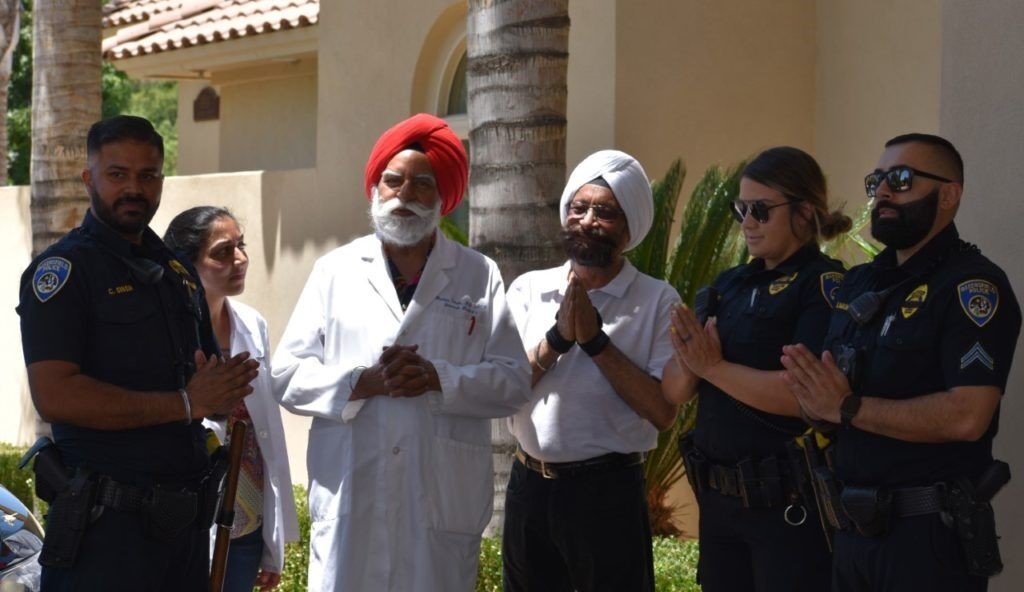 Detective Sandeep Malhi has been joined by Officers Charanjit Singh and Gurmanpreet Behar, each of them mentored and encouraged by Malhi, who looks to creating more opportunities for Indian Americans who want to join law enforcement. (photo provided)

A few years after 9/11, Sandeep Malhi was living in Long Beach, California, and working as an intern with the Secret Service when he got a call from his parents who encouraged him to move home to become Bakersfield Police Department’s first Punjabi police officer.

Malhi, who had graduated from Fresno State with a degree in Criminology, was finishing his master’s degree and had dreams of working with the federal government – maybe even the F.B.I.

But life after 9/11 had changed the atmosphere for the Indian American community in the southwest area of Bakersfield, where nearly 10,000 Sikh’s reside. Malhi’s neighbors where he had grown up were being terrorized with hate crimes and robberies because of their turbans and long beards.

The community at large needed to be educated. Bakersfield police officers were doing their best responding to calls, but when they arrived on scene they often couldn’t communicate with the residents.

Malhi’s parents told him if he really wanted to be a part of something and make a difference, he should come home and help the community.

“As a young Indian kid, you are told to be a doctor, go be a lawyer – those are the prestigious jobs,” said Detective Malhi. “But none of us growing up ever saw someone who looked like us in a police uniform and that’s so important for us. There are not many professions where you have the opportunity to provide selfless service to your community. We get to help our community every day. I’m proud to be a part of the noblest profession of all, law enforcement.”

These days, everyone in town knows Malhi and what he represents to the Punjabi community.

In the last few years, he has been joined by Officers Charanjit Singh and Gurmanpreet Behar, each of them mentored and encouraged by Malhi, who looks to creating more opportunities for Indian Americans who want to join law enforcement.

“Malhi and Singh have been super welcoming to me,” said Behar, who has been with the department for about a year. “They have been like older brothers, giving me their phone numbers, encouraging me through academy. Now that I am out patrolling, I take my time to get to know the Punjabi community and let them know I’m here. It has been a humbling experience.”

Residents see the officers at their local temples, attending community events, or on the scene on a service call and when they hear them speak Punjabi – it’s a game changer.

“I knew when I became a police officer that I would be able to make an impact and affect the Punjabi and Indian culture here in Bakersfield, but I didn’t realize to what extent,” Singh, 33, said. “But just being here able to explain the process … it’s very humbling to see I can be a bridge between Punjabi culture and law enforcement.”

Singh always knew he wanted to be a police officer. He felt it was his calling. He took a few detours, moved to Texas, lived by Disneyland, worked in the trucking industry, and was a service manager at a bank. But he was never able to shake the idea of law enforcement. He began the long and arduous process shortly after 2011 and spent years jumping through different hoops and becoming discouraged.

But in 2017, he filled out the application to join Bakersfield Police Department and everything fell into place.

“I didn’t know what it would feel like when I became a police officer, to see the looks on people’s faces when I started to speak to them in their own language,” Singh said. “When people call us, they don’t always call us on the best of their days. When I start speaking Punjabi to a victim, you can see that sigh of relief on their face and it’s very humbling when you see the look on their face that says ‘hey, they are one of us.’ It’s overwhelming to watch.”

Singh has followed in the footsteps of Malhi, who is an activist for the Punjabi community, by being a visible presence to residents. Singh often speaks at temples, has been a guest on an Indian radio show, and he recruits for the Junior Police Academy to get more kids from the Indian community to participate.

He can also be found wearing his blues and badges at events, along with his Kara that symbolizes his commitment to his Sikh religion.

He addresses everyone in the community as “auntie” or “uncle,” and if he is needed on a service call to translate, he is happy to roll out.

“I am very involved in my culture; I talk to the older community who are always happy to see me,” Singh said. “People ask me all the time how I became a police officer. It’s not a typical profession … but everyone is so proud when they see us.”

One of the ways Detective Malhi wanted to spotlight the importance of connecting with the Punjabi community was to change Bakersfield Police Department’s policy on facial hair. Malhi, along with Singh, both shaved off their beards when they joined the force.

Malhi wrote a memorandum asking for a change in policy and the change was unanimously approved by the police department in 2019, allowing police officers to honor their culture and religion, and allowing them to be who they are.

“It just never made sense to me that here we were trying to identify with our community, and we can’t keep our culture,” Malhi said. “We are thankful the department was able to take the lead in this and it shows how supportive Bakersfield PD is and how they respect everyone’s religious differences and the diversity in the community.”

As Malhi, Singh, and Behar continue to be beacons for the Punjabi community, residents such as Raji Brar, a founder of the Bakersfield Sikh Women’s Association, say their presence in the community has been pivotal to residents finally feeling heard.

“There’s a huge language and culture barrier and these officers help represent us,” Brar said. “It’s good for the community to see them out helping – now we have a Punjabi detective and some police officers who they see out in the streets and people are super proud of them. Now they can look at their sons and daughters and say ‘hey, you should do that too,’ because being a police officer – in India – is a commendable choice. Folks respect law and order.”