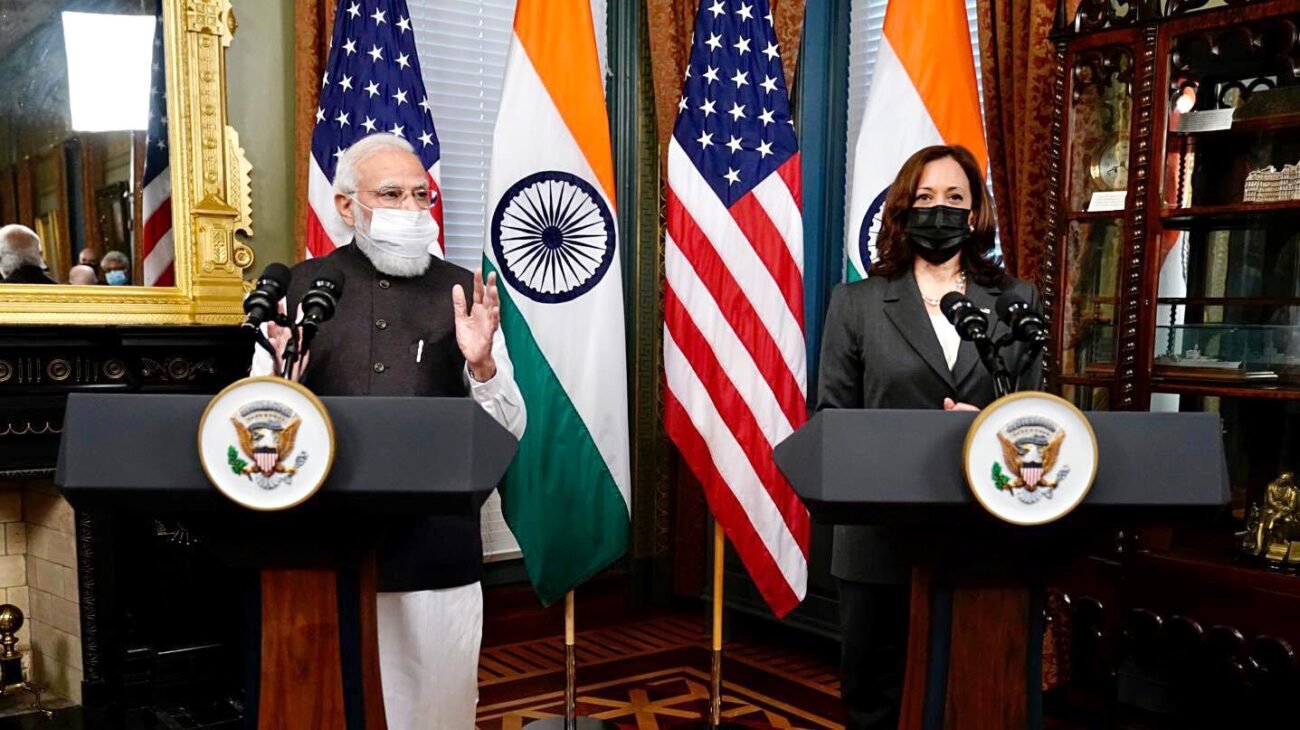 Prime Minister Narendra Modi and Vice President Kamala Harris deliver a joint statement in Washington, DC on Sept. 23. This was Modi’s first in-person meeting with Harris after she made history by becoming the first Indian American to become the vice president of America. (ANI photo)

Harris made the remarks during a joint statement with Prime Minister Narendra Modi. “India is a very important partner to the U.S. We had COVID-19, the kind of crisis and importance of our shared belief in a free and open Indo-Pacific region. On COVID-19, our nations have worked together. Early in the pandemic, India was a vital source of vaccines for other countries,” the Indian American vice president said.

“When India experienced the surge of COVID in the country, the United States was proud to support India in its need and its responsibility to vaccinate its people,” she added.

Meanwhile, Modi expressed his gratitude to the U.S. for extending a helping hand to India when it was hit by the second wave of COVID-19.

“I extend my gratitude for the warm welcome that you have extended to me and my delegation. Some months ago, we had the opportunity to talk to each other over the phone. We had a detailed discussion at that time. The way you spoke to me so warmly and naturally. I will always remember that,” Modi said in a joint press conference with Harris after the two leaders met.

“It was a very difficult time when India was hit by the second wave of COVID-19. The way you expressed concern and extended a helping hand, I express my gratitude to you. I will like to thank you,” he added.

Highlighting that India and America are “natural partners,” Modi said India and the U.S. have similar values, geopolitical interests, and our coordination and cooperation is also increasing.

“The vibrant and strong people-to-people connections between India and the U.S. is a bridge between our two countries, their contributions are praiseworthy,” he added.

“Your election as vice president of USA has been an important and historic event. You are a source of inspiration for many across the world. I am confident that under President Biden and your leadership our bilateral relations will touch new heights,” he added.

Modi met with Harris a day ahead of his highly anticipated bilateral meet with U.S. President Joe Biden.

This was Modi’s first in-person meeting with Harris after she made history by becoming the first Indian American to become the vice president of America.

Earlier in June this year, Modi held a telephonic conversation with Harris and discussed the United States’ strategy for global vaccine sharing and Quad vaccine initiative to fight the COVID-19 pandemic.

In a statement before leaving for the U.S., Modi had said he is looking forward to meeting Harris to explore opportunities for cooperation between the two nations, particularly in the area of science and technology.

Earlier in the day, Modi met Australian Prime Minister Scott Morrison and held meetings with five global CEOs for potential investment in India. These talks were part of a series of meetings that Modi undertook with select heads of corporates that have the potential to invest significantly in India.

Earlier on Sept. 23, the prime minister arrived in Washington for his much-touted U.S. visit. He had earlier addressed the Global COVID-19 Summit called by President Biden.

Biden is scheduled to host Modi at the White House on Sept. 24, in the first in-person meeting between the two leaders after Biden took over as the president on Jan. 20.

Modi’s U.S. visit will conclude on Sept. 25 with an address at the United Nations General Assembly focusing on the pressing global challenges including the COVID-19 pandemic, the need to combat terrorism, climate change and other important issues.

This is Modi’s first visit abroad beyond the neighborhood since the COVID-19 pandemic outbreak. He is accompanied by a high-level delegation comprising National Security Advisor Ajit Doval, Foreign Secretary Harsh Vardhan Shringla and senior officials.

Earlier, Mukesh Aghi, president and CEO of the U.S.-India Strategic Partnership, explained why the meeting between the two leaders is crucial, saying Harris is quite powerful within the administration and the connection between the two is going to help both countries in the short and long term.

“We are proud, we are proud I think. Are we proud because she’s an American? Are we proud that she is the first woman, we would be surprised to break what I call the glass ceiling, but I think more importantly is for Prime Minister Modi to build relationships with Kamala Harris, because you have to understand she comes from the left side of the progressive wing of the party, and they are very much cautious about doing trade deals with nations itself, and they would like to see more of human rights, labor rights embedded into trade deals, so I think it’s important that the relationship between the prime minister and Cabinet house is built,” he said.

The Indian American community believes that the greatest import of the meeting is symbolic.

“Community members think the greatest import of the meeting is symbolic. The prime minister of India will be sitting down face-to-face with the first vice president of Indian origin,” said Milan Vaishnav, Senior Fellow and director of the South Asia Program at the Carnegie Endowment for International Peace.