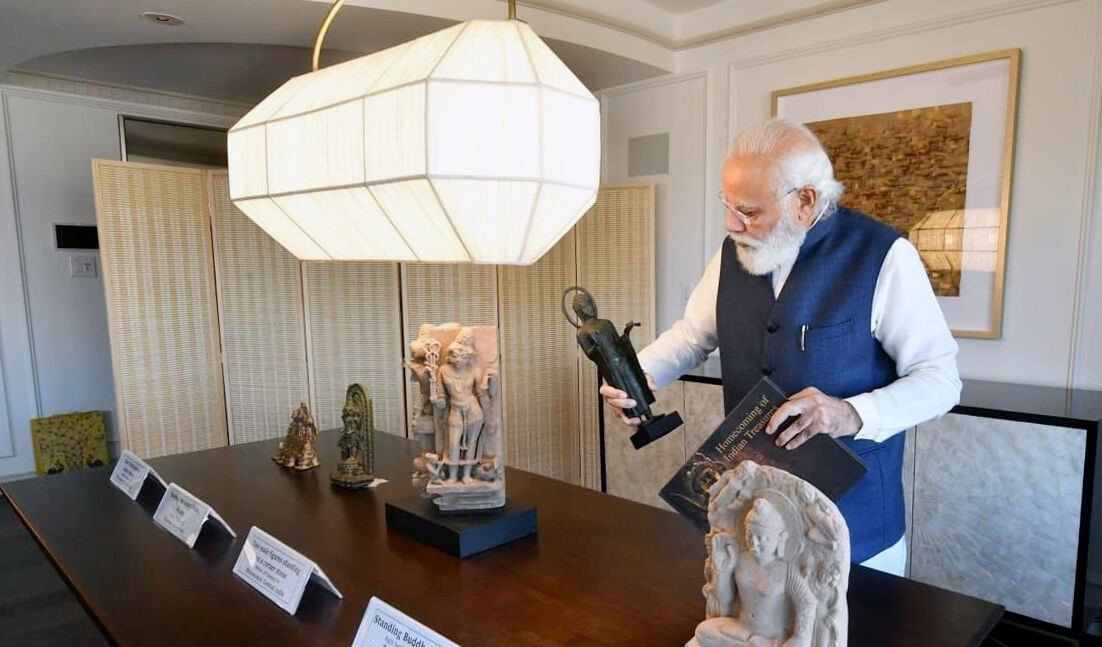 About 157 artifacts and antiquities were handed over by the U.S. during Prime Minister Narendra Modi’s visit, on Sept. 25. (ANI photo)

NEW YORK – As many as 157 artifacts and antiquities, including an exquisite bronze Nataraja from the 12th CE and copper anthropomorphic object of 2000 BC, were handed over by the United States during Prime Minister Modi’s visit to the country.

Modi and President Joe Biden reaffirmed their efforts to combat the theft, illicit trade and trafficking of cultural objects. The list of 157 artifacts includes a diverse set to items ranging from the one-and-a-half meter bas relief panel of Revanta in sandstone of the 10th CE to the 8.5-cm tall, exquisite bronze Nataraja from the 12th CE.

The items largely belong to the period of 11th CE to 14th CE as well as historic antiquities such as the copper anthropomorphic object of 2000 BC or the terracotta vase from the 2nd CE.

Some 45 antiquities belong to the Before Common Era.

While half of the artifacts (71) are cultural, the other half consists of figurines that relate to Hinduism (60), Buddhism (16) and Jainism (9).

Their make spreads across metal, stone and terracotta. The bronze collection primarily contains ornate figurines of the well-known postures of Lakshmi Narayana, Buddha, Vishnu, Siva Parvathi and the 24 Jain Tirthankaras and the less common Kankalamurti, Brahmi and Nandikesa besides other unnamed deities and divine figures.

There are 56 terracotta pieces (vase 2nd CE, pair of deer 12th CE, bust of female 14th CE) and an 18th CE sword with a sheath with an inscription mentioning Guru Hargovind Singh in Persian).

The prime minister conveyed his deep appreciation for the repatriation of the antiquities to India by the United States.

The Modi government has taken a series of steps to safeguard India’s heritage and culture. In November 2020, the media had reported about the return of an Annapurna Murti from the University of Regina’s collection at the Mackenzie Art Gallery, Canada.

The statue, stolen from India under “more than suspicious circumstances” in 1913, finally returned home to India. This was the second antiquity of high profile returned by Canada during the tenure of Modi. In 2015, former Canadian Prime Minister Stephen Harper had personally handed over the 900-year-old Parrot Lady sculpture of sandstone for return to India.

Many other stolen antiquities and artifacts have been returned to India over the past seven years.