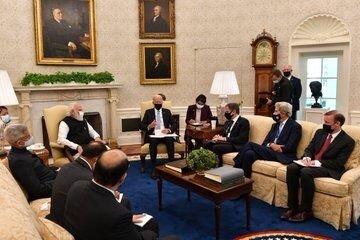 Indian Prime Minister Narendra Modi has set forth a policy of ‘5Ts’ in his meeting with U.S. President Joe Biden. One of the 5Ts, Talent, signifies the people to people link between the “two countries, which is manifested by the contributions made by the Indian American community.” (photo via IANS/ twitter.com/PMOIndia)

NEW YORK – Indian Prime Minister Narendra Modi has set forth a policy of “5Ts”– Tradition, Technology, Trade, Trusteeship, Talent – during his meeting with U.S. President Joe Biden for a decade of transformational partnership between New Delhi and Washington, according to Foreign Secretary Harsh Vardhan Shringla.

Briefing reporters after the Modi-Biden meeting in Washington on Sept. 24, Shringla said: “The ‘5Ts’ in consensus summarize our relationship. In the prime minister’s view, India and the U.S. are natural partners and endeavors to consolidate and strengthen our partnership of trust.”

Tradition stands for democratic traditions and values the two countries share, he explained.

Technology, the most important driving force in the world, has a particular role in the U.S.-India relationship.

Given the strong complementarities between the Indian and U.S. markets, increasing bilateral trade was a priority.

Trusteeship is the concept to deal with emerging global challenges of climate change, and as the concept is understood in India, the planet is held in trust for future generations.

Talent signifies the people to people link between the “two countries, which is manifested by the contributions made by the Indian American community.”

The very first takeaway was an answer to those attempting to lecture India on democracy. Jaishankar emphasized right up front that India is “the Mother of Democracy” and “based on his own experiences, PM affirms that democracy can deliver, democracy has delivered.”

Two, Modi’s governance vision “is one where no one is left behind. Therefore, the pursuit of integrated and equitable development. The numbers PM shared speak for the government’s record.”

Three, the “impact of India’s development on global progress is evident. When India grows, the world grows; when India reforms, the world transforms.”

Four, India’s “strong message of a foreign policy for global good (notably) India’s importance as a responder and a contributor (was) underlined.”

Five, aligned with her status as a leading power, India’s commitment “of vaccine supplies to the world is one clear indicator in that regard.”

Six, the PM’s highlighting of “the transformational role of technology in our daily lives. But equally, the significance of technology with democratic values.”

Seven, a message that “resilient and expanded global value chains and production centers is in our (the world’s) collective interest.”

Nine, India’s advice that “ocean(s) and its (their) resources must be protected. This lifeline should be safeguarded from expansion and exclusion.”

Ten, the PM’s note of caution “against regressive thinking and extremism”. It follows that “using terrorism as a political tool will backfire on those practicing it.”

Eleven, on Afghanistan, the world “must not allow use of its soil by terrorists. Nor should its (Afghanistan’s) predicament be taken advantage of by other states. The world has an obligation to its women, children and minorities.”

Finally, the PM telling the UNGA that “United Nations must enhance its effectiveness and reliability.”

ANI adds from New York: Prime Minister Narendra Modi on Sept. 25 met a contingent of Indian Americans gathered outside his hotel in New York as he was leaving for the airport to return to India.

Foreign Secretary Harsh Vardhan Shringla told the media that Modi’s visit to the U.S. has been “very successful.”