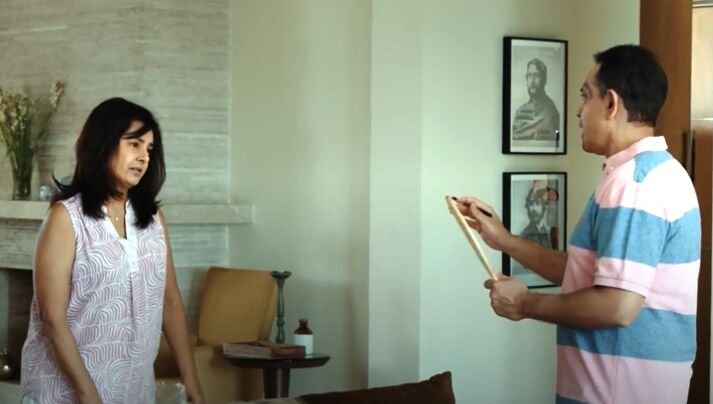 A scene from “Potluck.” (Publicity photo)

“Potluck” is supposed to be your metro-centric, slice-of-life dramedy about a family. Well, I could have found even a mildly entertaining series worth my time, but yet again, the director’s caliber decides it all.

Ojha is the director of what was easily one of the most unimpressive films of 2010—“Aisha,” with very little that has come since (“Chaurahen” and the multi-director “X: Past is Present”). 11 years have clearly not changed her perception of either cinema or media. Perhaps she should watch GOOD rather than intellectual cinema, and more of “Sandwiched Forever” or “Panchayat” to know how to deal with slice-of-life genuine humor in a web series.

The premise is good: a father (Jatin Sial) who wants to keep his family together by having a weekly potluck reunion. The children have their own personal issues —financial, emotional, romantic and more, There is an undercurrent of something to come, but what is happening on screen is dull rather than even droll, as monotonous as “Aisha” was (if not more) and soon, by the end of episode 3 (despite their crisp lengths of about 25 minutes each), things became insufferable. Most web series are relatable, whatever the genre, but even a basic connection was missing here with the intended receptors—the audience. I was one, long before I became a critic, and still am.

Sadly, I did not (or rather could not) go further. There was no emotional rapport whatsoever, no reason to go on. Jatin Sial put in a sincere effort to rise above his role and the material. Cyrus Sahukar and Ira Dubey were good, Kitu Gidwani sparkled in parts, but there was nothing else.

A strong negative was the overdone background music. It reminded me of the legendary Pyarelal’s statement to me that some filmmakers wanted loud BGM even when the hero was shaving on-screen and descending a staircase! The “composer” (or was it the director again?) must be given a basic course on the do’s and don’ts of scoring BGM.

Wish I could have sat through the whole series. Someone told me that in the end it was not bad at all, but the elementary rule is that a series should grip from the beginning. And if you start feeling restless by episode 2 (episode 1 looked quite promising) and episode 3 saw you yawn quite often, you know it’s time to sign off.