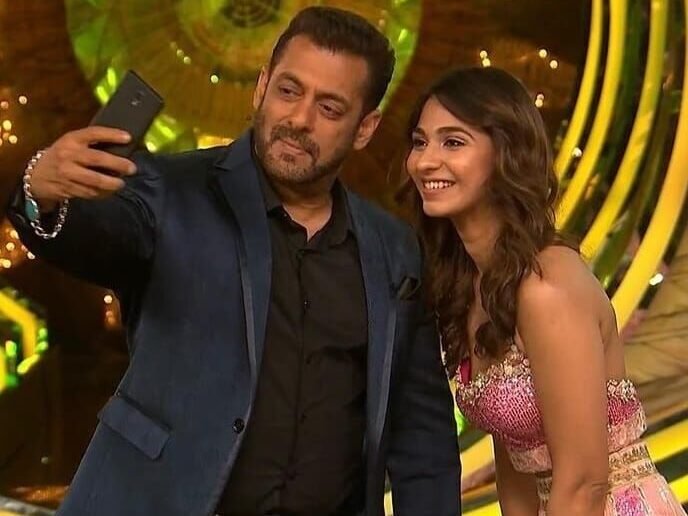 MUMBAI —The much-awaited and audience’s favorite Aapka Colors’ show “Bigg Boss” is back with its 15th season with a special jungle theme. The premiere night started with Salman Khan shaking a leg to “Jungle Hai Aadhi Raat Hai” and “Swag Se Swagat.” Like every season, the superstar gave a warm welcome to the contestants, and the third inmate to join the show was Vidhi Pandya.

Wearing a pink floral lehenga, Vidhi entered dancing to the popular track “Param Sundari.” She was quite excited to meet Khan and introduced herself as a “hardworking, lazy girl!” She told Khan she likes to work but loves to laze around too. She even revealed that she is a good cook and can cook food for any number of people, given the vegetables that are chopped. She said that she is like a chef because the magic lies in how you add the spices. This left Khan in splits.

Not just that, she even shared how she had the chance to get a picture clicked with Khan when she was 18. But Vidhi complained that the photo was very blurry and asked Khan if she could get one with him on stage. Khan happily obliged and clicked a selfie.

Later, when it was time to face the “Awesome Mirror,” it defined Vidhi as “Aalsi, aarampasand aur chulbuli (Lazy, lover of rest and effervescent).” And as for what animal of the jungle she is, the mirror called her a “panda.” Pandya got excited with the response and revealed that even her friends call her that.

Khan then called the next contestant, Simba Nagpal, and Pandya and her were both given a situation that would help them win the survival kit. Unfortunately, they lost it and they were made to take the tough route to enter the “Bigg Boss” house. Though she was scared, Pandya then made her way to the main gate of the house where the other inmates welcomed her.

And when she went up to the “Vishwa Sundari” tree and tried talking to it, the other housemates told her that the tree does not talk to everyone, but luckily she got a reply. This left her elated and feeling special.

Here’s wishing Pandya a safe and lasting tenure on the show.