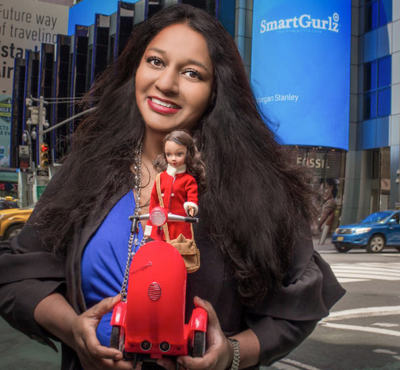 Sharmi Albrechtsen, CEO and founder of Smartgurlz, made the “Female Founders 100” list in the category of Build A Better Product. (Twitter photo/@sharmiindenmark)

The list featured women who are the most inspiring, the most creative, and the most tenacious role models in entrepreneurship, Inc. said.

These successful entrepreneurs are doing plenty of teaching. In fact, Inc. asked them to give their best advice for company-building in five key areas: from vetting the idea, to finding the people and funding, to winning customers and creating a culture.

“There’s a lot to learn—and a lot to admire,” the report said.

The categories in the Female Founders 100 list included: “Raised the Bar,” “Built a Better Product,” “Lifted Up Other Women,” “Tackled the Pandemic,” “Triumphed Over Adversity” and “Made the World Better.”

Among those recognized in the Raised the Bar category were Devaki Raj of CrowdAI, Avani Sarkar of Modi Toys, and Aishwarya Iyer of Brightland.

CrowdAI managed to raise a Series A within days of the pandemic’s hitting the U.S., while interest in the former Googler’s business drove Raj to double her team—all while the entire staff worked remotely, her profile notes.

With the sudden need for social distancing, she says, customers such as factory owners were placing a premium on being able to shut off machinery remotely if CrowdAI spotted something out of the ordinary. And she doesn’t see companies going back from that, it said.

Before Sarkar had her daughter, she hardly thought about children’s toys at all. Avani and her co-founder brother Viral, both first-time parents, couldn’t find any toys on the market that connected to their specific cultural experience. So they started Modi Toys, a children’s brand of plush toys and books rooted in the Hindu faith, the feature said.

Since launching in 2018, they’ve sold nearly 40,000 products across 49 states and 27 countries, including to celebrities Mindy Kaling and Jay Sean.

On the other hand, a pandemic that forced most everyone to stay home and cook more did have its silver linings for the company, the feature on Iyer notes.

Brightland has gained a cult following for its products: Its $70 set of mini bottles of two oils and two vinegars has sold out three times in the past year, it said.

So while everything else seemed to slow down—particularly the process of shipping and designing products with a dispersed workforce—Brightland’s eight-person team shifted into high gear.

The company applied its ethos of carefully sourced, unadulterated ingredients to a slew of new products, including vinegars (balsamic, champagne, and a limited-edition strawberry) and olive oils infused with garlic, chili, lemon, and basil.

In September, Brightland launched a line of raw, unfiltered honey produced by two fourth-generation beekeeping families. And the company is planning its first pop-up retail space this holiday season in New York City, the feature said.

In 2020 alone, she planned to attend 15 major trade fairs to help bring her award-winning robots to classrooms nationwide. Then Covid-19 hit, and every single conference was canceled. Worse still, in March, Amazon “temporarily prioritized” essentials like health care items, making it impossible for Smartgurlz to ship orders for five months, it said.

Schools were closed anyway, taking the air out of a deal Smartgurlz signed in 2019 with Pitsco Education to launch a new product line called Smartbuddies for children in grades third through fifth. Summer camps were closed too, another potential home for her robots.

Her brilliant idea: to take the curriculum she developed for the Pitsco project and adapt it to online learning. She dubbed it camp-in-a-box, and by the end of last summer 250 kids were enrolled, the profile added.

In the Lifted Up Other Women category, Girls Who Code’s Reshma Saujani was among the honorees.

Saujani, the founder of Girls Who Code, has long worked to close the gender gap in technology. But after seeing the exhaustion on the faces of many moms on her team as the pandemic unfolded, she was inspired to use her nonprofit to tackle the broader challenges women face in the workforce, the profile said.

They earn less than men; they get passed over for promotions more than men; and they tend to take on more of the caregiving responsibilities for children and elderly parents.

The pandemic made things worse. On Dec. 7, 2020, Saujani wrote an op-ed for The Hill asking for paid family leave, affordable child care, and pay equity policies.

The following month, the mother of two bought a full-page ad in The New York Times, addressed to President Joe Biden from 50 prominent women, urging him to adopt a Marshall Plan for Moms, so-named for America’s 1948 initiative to invest in rebuilding Europe after World War II, the report said.

No Indian American women were honored in the Tackled the Pandemic and Made the World Better categories.