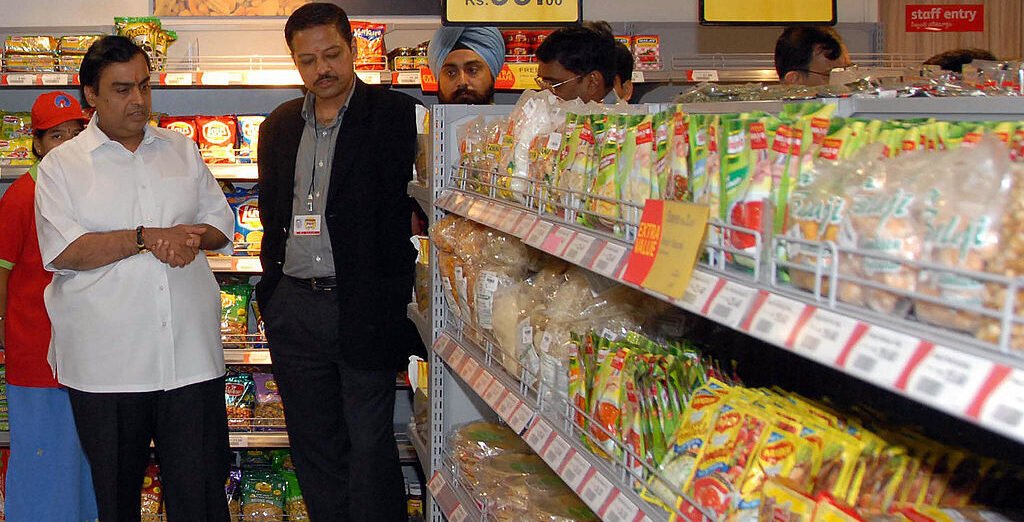 File photo of the chairman of India’s Reliance Industries, Mukesh Ambani (left), looking at rows of produce during a visit to a Reliance Fresh supermarket in Hyderabad, on Nov. 2, 2006. (Noah Seelam/AFP via Getty Images)

NEW DELHI — The 7-Eleven empire is coming to India.

India’s Reliance Retail Ventures has set a franchise agreement with 7-Eleven, Inc., to launch convenience stores in the second most populous nation, the company said Oct. 7.

The stores will first be launched in the financial hub of Mumbai. Indian media reported the first store is due to open within a few days.

Reliance, India’s biggest retailer, said in a statement that the stores would offer the usual convenience store range of drinks, snacks and other items chosen to suit local tastes, with “affordability and hygiene at its very core.” It didn’t say if the stores will be selling 7-Eleven’s famous Slurpees.

“India is the second largest country in the world and has one of the fastest-growing economies,” 7-Eleven’s president and CEO, Joe DePinto, said in a statement. “It’s an ideal time for the largest convenience retailer in the world to make our entry into India.”

The Japanese company Seven & i Holdings is the parent company of 7-Eleven Inc., and it has been fast expanding the network of bright green, orange, red and white “7” signs across Asia, where convenience stores have displaced traditional grocers in many neighborhoods.

In India, 7-Eleven will be competing with local chains like Twenty Four Seven and In & Out.

The advent of Western-style convenience stores may not be welcomed by all — comments on Twitter suggested some Indians worry it might hasten a decline in mom-and-pop retailers.

But the idea might appeal to shoppers hankering for a late night snack or early morning food run.

Reliance Retail is part of the Reliance Industries conglomerate that spans a wide range of businesses.

7-Eleven says it runs franchises or licenses more than 77,000 stores in 18 countries and regions, about a fifth of them in North America. It recently announced plans to expand into Laos and Cambodia.