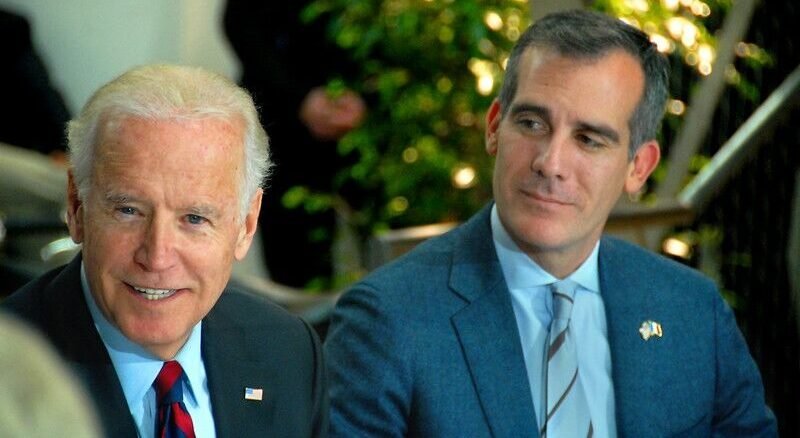 NEW YORK (IANS) – U.S. Ambassador-designate to India Eric Garcetti’s decision to attend an art show by President Joe Biden’s son Hunter presaging the sale of his paintings reportedly for as much as $500,000 has raised questions of ethics.

“I’d refer you to the gallerist for questions about the event and – as well as the representatives of Mr. Garcetti, in terms of his attendance,” she told a reporter who asked her about the propriety of him being at the event.

The controversy centers on the White House assertion that the names of buyers of the high-priced art would remain a secret to avoid any semblance of conflict of interest or of a buyer trying to influence the administration of a president who has vowed to fight corruption abroad.

Garcetti, who is the mayor of Los Angeles, was nominated by Biden to be the envoy to India in July, but his confirmation by the Senate, as required by U.S. law, has been held up by a Republican.

Republican Senator Ted Cruz has obstructed most of the nominations of ambassadors in a pique over Biden waiving sanctions on the Nord Stream 2 gas pipeline from Russia to Germany.

President Biden, who has made fighting corruption abroad an important element of his foreign policy, has directed his administration to deal “robustly” with international corruption.

But domestically the ethics of Hunter Biden’s business and art dealings have been questioned by the president’s critics.

Hunter Biden, who had left the Navy reportedly over allegations relating to drugs, snagged without experience in energy or Eastern Europe a position with a Ukrainian gas company, Burisma, with payments of about $50,000 per month. This was while his father as vice president was overseeing Washington’s involvement with Kiev.

Later, after accompanying his father on an official visit to China, Hunter Biden was appointed to the board of a Chinese equity fund, BHR Partners, despite lacking experience in those areas. He subsequently acquired a 10 percent stake in the company with links to the state-run Bank of China.

Psaki refused to say categorically whether he still had the shares or not.

“He’s been working to wind that down… Beyond that, I would talk to his representatives,” she said.

And in a genius move, Hunter switched after his father’s election from being a business and finance expert to an artist, whose artworks are suddenly valued at $500,000, a high price for someone with no previous presence in the art world.

To deal with the ethics issue of people seeking favors from the president funneling money to the son by buying his art, the White House said that the identities of buyers would be kept a secret by the art gallery handling the sale.

“We were very transparent about what recommendations were made to the gallerist,” Psaki said at her briefing.

Raising the ethics issue, a reporter asked her: “The president’s son would be selling artwork and then meeting, potentially, with people who would seek to buy it. If you have attendees at that event who might be seeking either jobs in this administration or favors from this administration, isn’t it an awkward situation to put the president in?”

Referring to Garcetti, the reporter said that “an ambassador nominee was at this event. Should we expect to see more people who seek jobs in this administration attending events like this in the future?”

About 200 people, including Hunter Biden, attended the art show at a gallery in Los Angeles on Oct. 1, Mother Jones magazine reported on its website.

He was impeached on charges of abusing his power to get Ukrainian authorities to investigate Hunter Biden and obstructing Congress, but was acquitted by the Republican-controlled Senate.