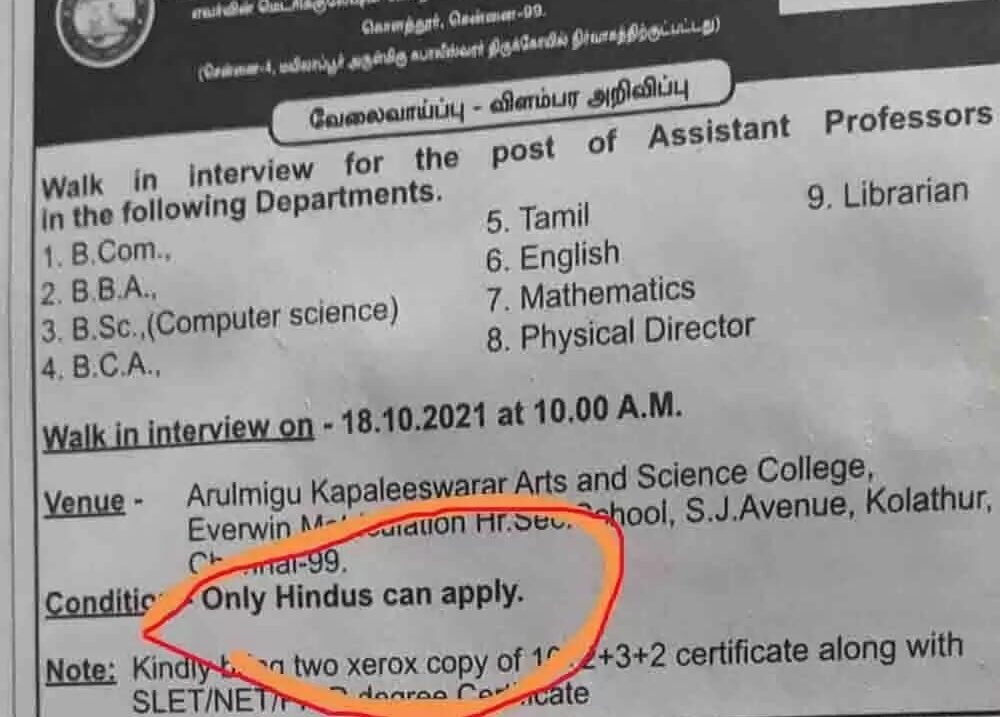 The “Hindus only” job advertisement. (photo via IANS)

CHENNAI – An advertisement by the Hindu Religious and Charitable Endowment for various posts in its college inviting only Hindus has created an uproar in the state with several individuals and organizations coming out against it.

The advertisement, which appeared in various publications on Oct. 13 for various teaching and non-teaching posts for Arulmigu Kapaleeswarar Arts and Science College in Kolathur, has stated that the posts are ‘Only for Hindus.”

The HR&CE department is opening four new arts and science colleges, including Kapaleeswarar college in Kolathur, from 2021-22. In the advertisement, a walk-in-interview for the post of assistant professors to teach BCom, BBA, BSc Computer Science, BCA, Tamil, English, Mathematics courses as well as physical education director and librarian posts is sought. Walk-in interviews for the post of non-teaching staff, including office assistant, junior assistant, watchman, and sweeper were also sought.

The advertisement said that only Hindus need to apply for the posts, which has led to a major uproar.

K. Pandyan, former president of the Association of University Teachers, while speaking to IANS, said, “HR&CE department has 36 schools, five arts, and science colleges and a polytechnic college and this is the first time that such an advertisement. has appeared stating that posts are reserved for Hindus only.”

He further said that a department that is run by the government cannot discriminate on the grounds of religion and make candidates from other religions ineligible.

Pandyan cited the example of the Muslim Service Society Wakf Board College in Madurai which has several non-Muslim faculty members. He said that the government can run the colleges only on the basis of what is written in the constitution.

HR&CE Minister P.K. Sekar Babu was not available for comment.