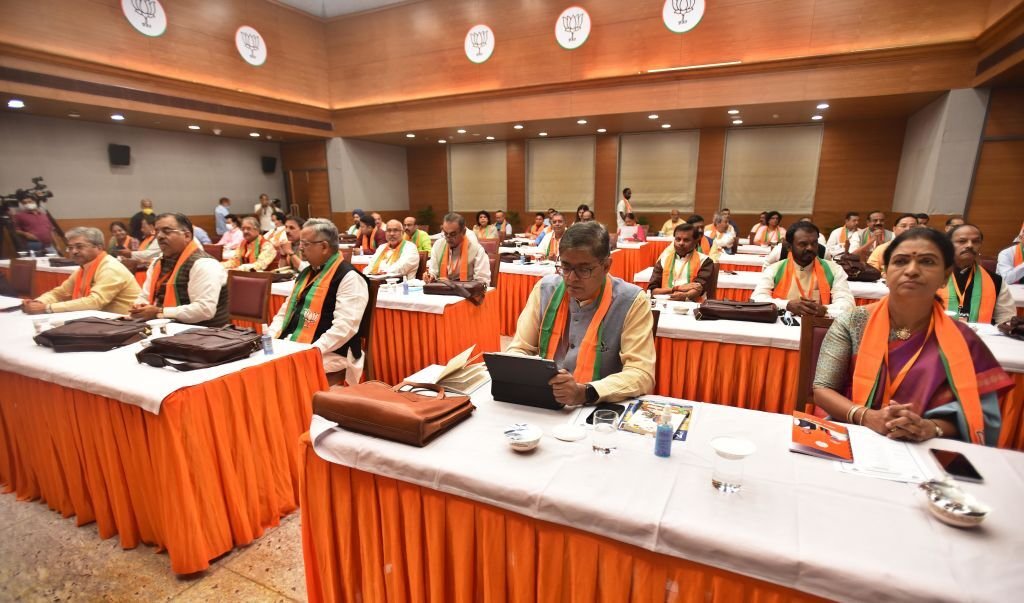 BJP party leaders during an office bearers meet ahead of the assembly polls, at BJP headquarters on Oct. 18, 2021 in New Delhi, India. (Raj K Raj/Hindustan Times via Getty Images)

NEW DELHI – Bharatiya Janata Party national vice president Baijayant ‘Jay’ Panda has said that the party is “fully” prepared for the upcoming assembly elections and it will emerge “victorious” in all the five poll-bound states.

Panda made the remark while talking to the media after a meeting of the BJP’s national office bearers at the party headquarters Oct. 18.

In the meeting, Prime Minister Narendra Modi was thanked for the vaccination campaign and various other schemes for the welfare of the poor.

While talking to reporters after the meeting, Panda said that the BJP does not wait for elections. It keeps connecting with the public through different campaigns every week, every month.

He asserted that India is going to achieve the target of 100 crores vaccinations.

“The IMF has also praised the work of the Government of India on Corona. India’s exports are growing rapidly, it is a symbol of development and today the world is praising the pace of development of the Indian economy,” Panda said.

The meeting, chaired by party president J.P. Nadda, was called in view of the assembly polls in five states.

National office bearers, during the meeting, discussed the party’s preparations, its achievements and the functioning of the organization.

The strategy to highlight the achievements of the government was also drawn during the meeting.

Nadda, on the occasion, thanked the prime minister for the various schemes being run for the welfare of the poor and also raised questions about the attitude of the opposition parties.

After the meeting, Nadda also held a separate meeting with the general secretaries of the party.

BJP has a large number of workers, especially at the village level, which is useful primarily during elections. The party has decided to inculcate a sense of encouragement aimed at the party workers to make plans for the welfare of the society and the nation.