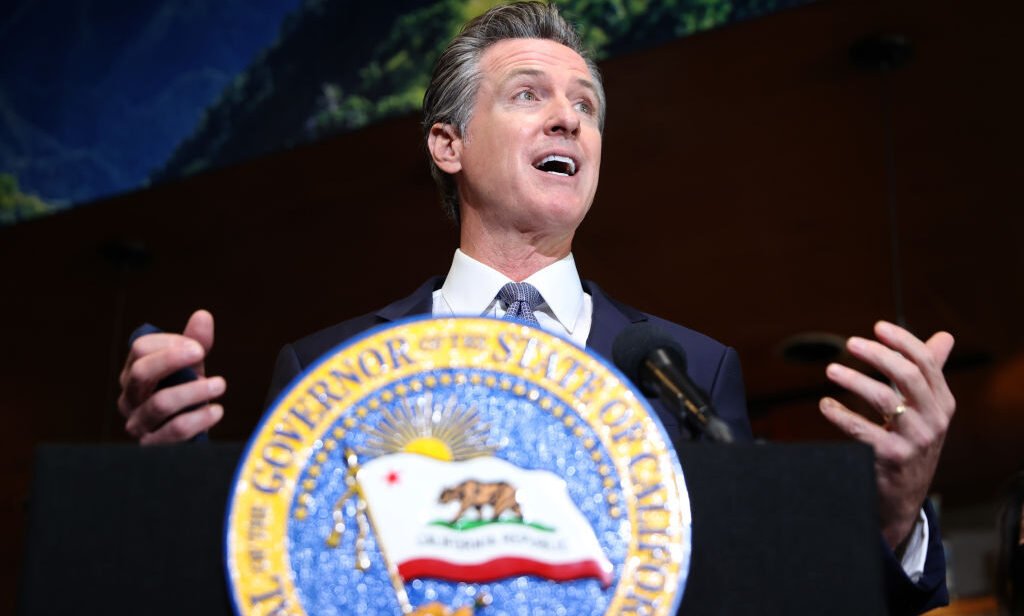 File photo of California Gov. Gavin Newsom speaking at a news conference on Oct. 8, 2021 in Oakland, California. The governor signed a bill that makes California among the first in the nation to list ethnic studies as a graduation requirement for all public high school students. The model curriculum focuses on four historically marginalized groups that are central to college-level ethnic studies: African Americans, Chicanos and other Latinos, Asian Americans and Pacific Islanders, and Native Americans. It also includes lesson plans on Jews, Arab Americans, Sikh Americans and Armenian Americans who are not traditionally part of an ethnic studies curriculum. (Justin Sullivan/Getty Images)

SAN FRANCISCO – Along with English, science, math and other graduation requirements, California high school students will have to take a course in ethnic studies to get a diploma starting in 2029-30.

Gov. Gavin Newsom signed a bill Oct. 8 that makes California among the first in the nation to list ethnic studies as a graduation requirement for all public high school students.

Assemblyman Jose Medina, a Democrat from Riverside who authored the legislation that has been years in the making, called it a huge step for California.

“It’s been a long wait,” said Medina. “I think schools are ready now to make curriculum that is more equitable and more reflective of social justice.”

The new law requires all public schools in the state to offer at least one ethnic studies course starting in the 2025-26 school year and requires students graduating in the 2029-30 school year to have completed a one-semester course in the subject.

The ethnic studies movement has its roots in California, where students protested in the late 1960s at San Francisco State University and the University of California, Berkeley to demand courses in African American, Chicano, Asian American and Native American studies.

Earlier this year, the state Board of Education approved a model ethnic studies curriculum that offers dozens of suggested lesson plans and instructional approaches. The curriculum is not mandatory but schools can choose from its lesson plans or use it as a guide to design their own.

The curriculum underwent several drafts over three years and was subject to heated debate before winning approval in March.

The model curriculum focuses on four historically marginalized groups that are central to college-level ethnic studies: African Americans, Chicanos and other Latinos, Asian Americans and Pacific Islanders, and Native Americans. It also includes lesson plans on Jews, Arab Americans, Sikh Americans and Armenian Americans who are not traditionally part of an ethnic studies curriculum. Those groups were added after objecting to an earlier draft that left them out.

The new legislation adds the completion of an ethnic studies course to other standard graduation requirements, including three years of English and social studies, two years of math and science, among others. It gives a few years lag time so schools can prepare.

“Schools can’t just flip the switch and be ready. This gives school districts plenty of time to get their curriculum in place and hire well qualified teachers to teach these classes,” Medina said.

Several of California’s largest school districts are ahead of the curve.

In San Francisco, where high schools have offered ethnic studies as an elective since 2015, students will be required to take two semesters of ethnic studies courses to graduate starting in 2028.

Other states have taken different approaches. Oregon is developing ethnic studies standards for its social studies curriculum and beginning this year requires the subject in K-12 curriculum. Last year, Connecticut approved a law requiring all high schools to offer courses in Black and Latino studies by the fall of 2022.

Several GOP-led states have taken the opposite tack, banning the teaching of so-called critical race theory in K-12 schools or limiting how teachers can discuss racism and sexism in the classroom. Critical Race Theory is a way of looking at America’s history through the lens of racism, but it is not typically taught in public schools. Republicans across the country have used critical race theory as a catchall phrase to describe racial concepts they find objectionable, including white privilege, systemic inequality and inherent bias.

“At a time when some states are retreating from an accurate discussion of our history, I am proud that California continues to lead in its teaching of ethnic studies,” Secretary of State Shirley Weber, a former academic who created an ethnic studies program at San Diego State University in the 1970s, said in a statement applauding the bill signing.

Another bill signed Oct. 8 by Newsom requires health education courses in middle and high schools to include mental health instruction, to help students identify common mental health problems and know how to get help.

Educators say it is fitting that California has taken a lead in ethnic studies legislation, and also long overdue. More than three-quarters of California’s 6 million public school students are not white.

Medina initially introduced his measure in 2019 but it was sidelined amid debate over the model curriculum. Newsom vetoed an earlier version, saying the curriculum needed revision and should be in place before the state made ethnic studies a requirement.

State Superintendent of Public Instruction Tony Thurmond has praised ethnic studies legislation as a way to help students of color see themselves reflected in what they learn, and also to learn about their histories.

Medina said America’s wider discussion of race and racism since the murder of George Floyd last year makes such a curriculum more important than ever.