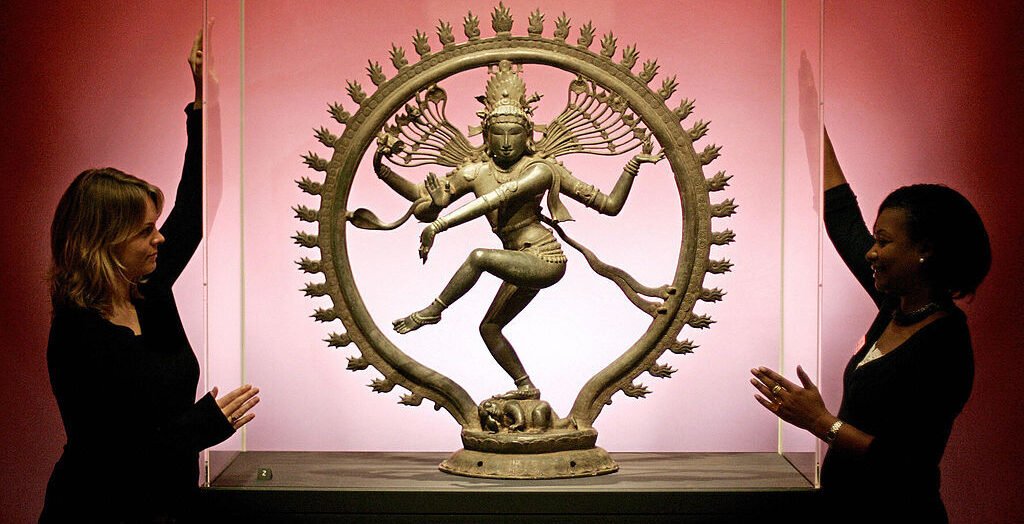 File photo of an eleventh century statue of Shiva as Nataraja is pictured at the Royal Academy of Arts in central London, Nov. 7, 2006. U.S. authorities returned about 250 antiquities to India Oct. 28 in a long-running investigation of a stolen art scheme by Indian American dealer Subhash Kapoor, who has denied the allegations. (representational image only/Shaun Curry/AFP via Getty Images)

NEW YORK (AP) — U.S. authorities returned about 250 antiquities to India Oct. 28 in a long-running investigation of a stolen art scheme.

The items, worth an estimated $15 million, were handed over during a ceremony at the Indian Consulate in New York City. The centerpiece is a bronze Shiva Nataraja valued at $4 million, authorities said.

The ceremony stems from a sprawling probe by the Manhattan district attorney’s office and U.S. Immigration and Customs Enforcement. The investigation has focused on tens of thousands of antiquities allegedly smuggled into the United States by Indian American dealer Subhash Kapoor, who has denied the allegations.

The case “serves as a potent reminder that individuals who maraud sacred temples in pursuit of individual profit are committing crimes not only against a country’s heritage but also its present and future,” District Attorney Cyrus Vance Jr. said in a statement.

Authorities say Kapoor — jailed in India and facing charges there pending a U.S. extradition request — used his Arts of the Past gallery in New York to traffic looted treasures from India and various countries in Southeast Asia. The investigation has resulted in the recovery of 2,500 artifacts valued at $143 million and convictions of six Kapoor co-conspirators, Vance said.

The Shiva Nataraja bronze was sold by the mother of Nancy Wiener, a gallery operator who pleaded guilty in the case this month to charges of conspiracy and possession of stolen property, authorities said. Nancy Wiener sold looted items to major museums in Australia and Singapore, they said.

In June, the district attorney’s office returned more than two dozen artifacts worth $3.8 million to Cambodia as part of the investigation. Another 33 objects were sent back to Afghanistan in April.

Court papers filed in New York says Kapoor went to extraordinary lengths to acquire the artifacts, many of them statues of Hindu deities, and then falsified their provenance with forged documents. They say Kapoor traveled the world seeking out antiquities that had been looted from temples, homes and archaeological sites. Some of the artifacts were recovered from Kapoor’s storage units in New York.

Kapoor had the items cleansed and repaired to remove any damage from illegal excavation, and then illegally exported them to the United States from their countries of origin, according to U.S. prosecutors.