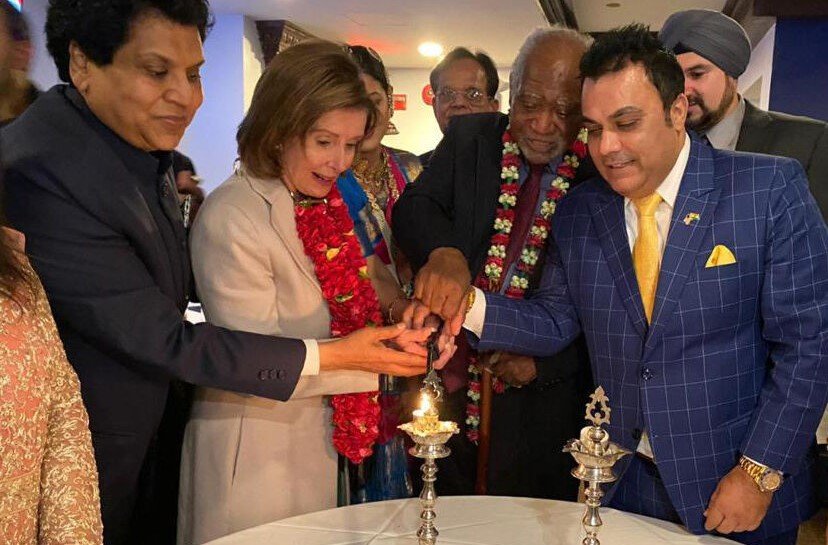 Many U.S. officials across the country have used their platforms as public officials to celebrate Diwali with Indian American community members in their respective regions.

Vice President Kamala Harris Nov. 4 extended her best wishes to everyone celebrating Diwali, the festival of lights, and called to honor the light within one another, according to reports.

“Happy Diwali to everyone celebrating the Festival of Lights here in the United States and around the world. @SecondGentleman and I extend our warmest wishes for a holiday filled with light, love, and prosperity,” the vice president tweeted.

In the video shared by Harris, she said that this year’s Diwali holds even deeper meaning in the midst of a “devastating pandemic,” an ANI report said.

“This year, Diwali arrives with even deeper meaning, in the midst of a devastating pandemic. The holiday reminds us of our nation’s most sacred values. Our gratitude for the love of family and friends. Our responsibility is to lend a hand to those in need. And our strength to choose light over darkness, to seek knowledge and wisdom and to be a source of goodness and grace,” Harris said.

“Let’s remember to honor the light within one another from our family to yours. I wish you a joyous Diwali,” she concluded.

Meanwhile, U.S. President Joe Biden too extended greetings to people celebrating the festivals of Diwali all around the world.

“May the light of Diwali remind us that from the darkness there is knowledge, wisdom, and truth. From division, unity. From despair, hope,” Biden said in a tweet.

“To Hindus, Sikhs, Jains, and Buddhists celebrating in America and around the world –from the People’s House to yours, Happy Diwali,” the tweet added.

Dr. Vijay G Prabhakar, Indian American community leader from Chicago, said that this Diwali celebration with the participation of Pelosi, the third-highest elected official of U.S., was significant.

Neil Khot, national chairman of the Indian American Business Coalition, praised the inspiring leadership of Prabhakar for facilitating this historic event and for also organizing Diwali celebrations in the City of Chicago Council, Cook County Treasurer’s Office and the State of Illinois government for the first time in 184 years.

Kishor Mehta, emeritus chair of Davis’s Multi-Ethnic Advisory Task Force, thanked Davis, who was the only congressman from the Midwest who welcomed India’s Prime Minister Modi to the United States in New York in 2014 and in Houston in 2019, for hosting the Diwali celebration.

Mehta added that Davis has been an ardent supporter of strong U.S.-India ties especially recalling his pioneering efforts during the COVID-19 pandemic, the release said.

Texas Gov. Greg Abbott Oct. 31 hosted a Diwali event at his home in Austin for a small group of prominent Indian Americans from the region.

Abbott, who was dressed in a traditional Nehru jacket, welcomed members of the Indian American community to his home, where they exchanged Diwali greetings, followed by a traditional lamp lighting and an address by the governor.

Abbott, at the event, expressed his pride in being the first governor from the state to start celebrating the Indian festival of lights. Since starting a few years ago, Abbott has made the Diwali event an annual occasion.

Indian American chief executive officer of Nextt Arun Agarwal was part of the organization of this year’s event.

California Gov. Gavin Newsom’s office Nov. 4 released a video of the governor remarking on the celebration of Diwali.

The tweet, which features a 1-minute, 19-second video, reads, “California is proud to be home to the largest Hindu, Sikh, and Jain communities in the nation. Wishing a happy Diwali and Bandi Chhor Divas to all who celebrate!”