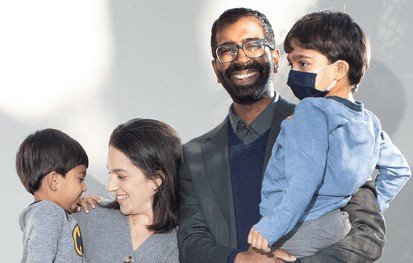 Bangladeshi American community activist Shahana Hanif, the daughter of a taxi driver, handily won a seat on the New York City Council, beating out her Republican opponent by capturing 91 percent of the vote. (shahanafrombk.com photo)

Shekar Krishnan and Shahana Hanif made history Nov. 2 evening as the first South Asian Americans to be elected to the New York City Council.

New York has one of the largest populations of Indian Americans and South Asian Americans in the U.S. Moreover, the city is home to an estimated 769,000 Muslims, according to The New York Times.

Krishnan and Hanif are both community activists who stood alongside New York city cab drivers — 40 percent of whom are South Asian Americans — as they embarked on a two-week long hunger strike to protest the huge costs of taxi medallions which allow them to drive legally in the city.

Krishnan, an Indian American, said his district, which is the Jackson Heights and East Elmhurst neighborhood, has long been under-resourced, and even more so amid the Covid-19 pandemic. The community activist and civil rights lawyer, who specializes in fighting housing discrimination and community displacement, beat his opponent, Republican Shah Shahidul Haque, by a landslide. Krishnan received 61 percent of the vote, while Haque received 21 percent.

“So excited for our AAPI representation in city politics,” tweeted Krishnan on Nov. 5 evening. In an interview with NBC News, he said the absence of South Asian representation in city politics meant that the needs of his constituents have long been neglected. Krishnan said he’ll focus on obtaining more public funding for Elmhurst Hospital, which was “at the center of the pandemic” but had only one bed for every 1,000 patients; investing in public housing and different models of community land trusts; and creating bilingual education programs.

Hanif is the first Muslim American woman to be elected to the New York City Council. The Bangladeshi American also overwhelmingly swept to victory, beating out her opponent Brett Wynkoop by claiming 91 percent of the vote.

Hanif will represent District 39, Park Slope, Brooklyn. “We are building an anti-racist, feminist city. We deserve a city that guarantees equitable education, invests in climate solutions, and makes our immigrant neighbors heard and safe. I’m ready to move our city forward in service of our progressive vision every day,” she said after her win, as reported by Patch.

Democrat Felicia Singh, a teacher, lost her bid to beat out Joan Ariola, chairwoman of the Queens Republican Party. Ariola took 68 percent of the vote, while Singh amassed 31 percent.

Singh is the daughter of a taxi driver, and also stood side by side with the striking drivers. In her concession message, Singh wrote: “I ran to include people who had never been part of our electoral process at all. Folks who felt erased and neglected year after year.”

Also in New York, Minita Sanghvi won her election for Saratoga Springs Commissioner of Finance. The tenured professor of business at Skidmore College also serves on the Saratoga Springs Public Library Board as the Finance Officer.

In Pennsylvania, Dr. Robert Singh won his election for the Tredyffrin/Easttown School board. While Madhu Gurthy was elected to the Downingtown Area School District, and Dr. Mariam Mahmud, in spite of personal and racist attacks during her campaign, won her election for Central Bucks School Board.

Akriti Bhambi was elected to the Cambridge School Board in Boston, Massachusetts.

“We’re so proud and excited for our candidates that won their elections on Tuesday night,” said Neil Makhija, executive director at IMPACT, in a press statement.

“South Asian American leaders showed across the board that they can win contested elections in key areas, even when the national mood is stacked against them. We look forward to supporting them as they officially take office,” he said.