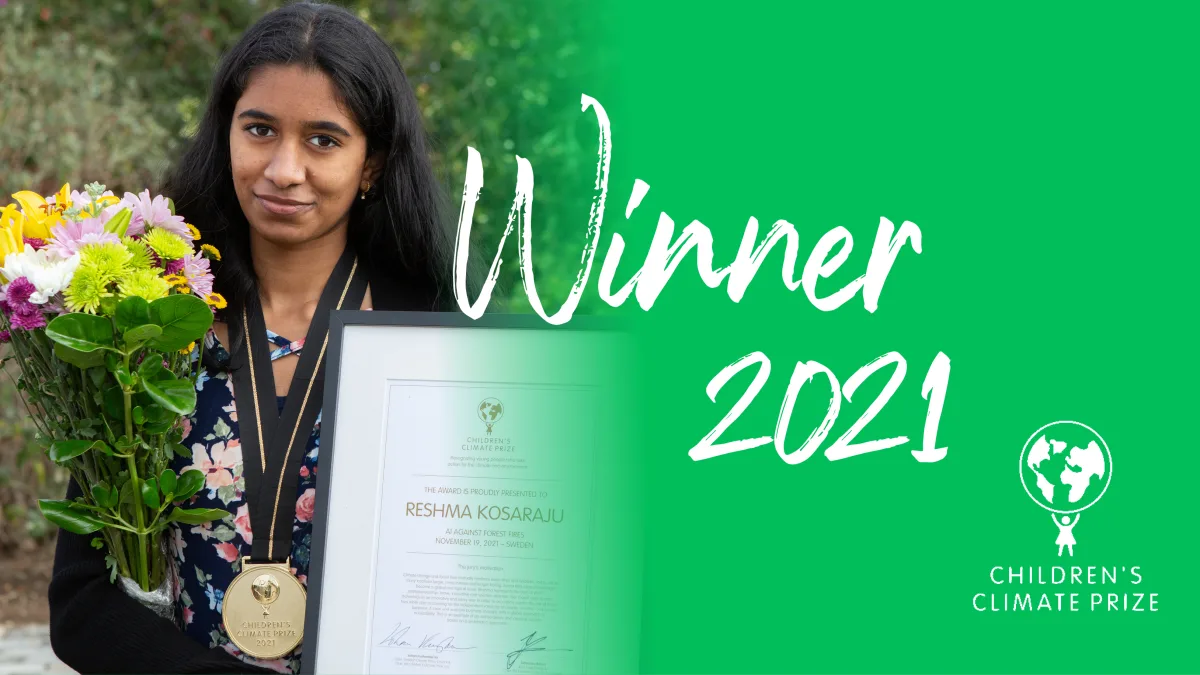 Reshma Kosaraju was named the winner of the 2021 Children’s Climate Prize. (photo provided)

The Children’s Climate Prize Nov. 8 announced the winner of its 2021 award, with Indian American teenager Reshma Kosaraju claiming the prize.

Kosaraju, a 15-year-old from Saratoga, California, was named the winner for her project, AI Against Forest Fires, which uses AI technology to predict forest fires. Her courageous, innovative and solution-oriented approach to forest fires, a highly topical and growing global issue, made Kosaraju’s project stand out, a news release said.

Explaining the jury’s motivation, the release notes that climate change and forest fires mutually reinforce each other and wildfires, today, are in many locations larger, more intense and longer lasting.

Forest fires have increasingly become a global and topical issue. Kosaraju represents the best of youth entrepreneurship: brave, innovative and solution-oriented, the release notes. Her model uses AI and technology in an innovative and savvy way in order to accurately predict the risk of forest fires while also accounting for the independent variables of climate, weather and human behavior, the release said.

A clear and scalable business concept, with a global approach to accessibility, this is an example of an extraordinary and creative solution based on a systemized approach, it added.

Fires are a natural part of a forest’s ecosystem, but the underlying conditions have changed. It seems as though climate change and forest fires are increasingly mutually catalytic, resulting in more intense and longer lasting forest fires. Forest fires have become a global problem, causing over 339,000 premature deaths worldwide – and threatening biodiversity by destroying animals and nature, the release went on.

The project, it said, can predict forest fires with almost 90 percent accuracy. Kosaraju uses open data, such as temperature, humidity, wind speed, soil moisture and human behavior to, with the help of AI, calculate where and when the probability of a forest fire occurring is greatest.

She hopes the Children’s Climate Prize will draw attention to her project, so that more people can become aware of the AI model’s existence, the release noted.

“I’m so happy and my hope is that this win will lead to more people hearing about AI against forest fires, and that it will become a universally accessible tool for predicting forest fires. I especially wish for people living in areas more prone to forest fires to be aware and make use of this project, as it could greatly improve preparedness,” Kosaraju said in a statement.

AI against forest fires is, at present, a functioning prototype on a computer. However, the goal moving forward is to make the model publicly available in the form of an app, while heavily marketing its use within fire departments to proactively mitigate forest fires.

Her next step will be to further improve the user interface so that the AI model can be scaled-up to the global platform.

“I’m incredibly impressed by Reshma’s inventiveness and drive. Reshma is the obvious winner of the 2021 Children’s Climate Prize, a year when forest fires have once again affected a large part of the world. The world needs Reshma’s innovation and we need to support the courageous youth who are working for a better tomorrow,” said Johannes Boson, CEO of Telge Energi and chairman of the Children’s Climate Foundation. “We hope that the win will help boost Reshma’s hopes for the project – both financially and through the increased awareness that comes with the prize.”

This year marks the sixth edition of the Children’s Climate Prize, one of the world’s biggest international climate awards for young innovators, entrepreneurs, conservators and changemakers.