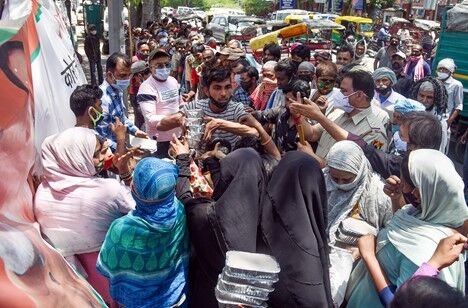 File photo of homeless people at a free food distribution drive outside LNJP hospital, during a curfew imposed to contain the COVID-19 surge, in New Delhi on May 24, 2021. (ANI photo)

NEW DELHI – The Supreme Court on Nov. 16 noted that people are “suffering from hunger and dying of it,” and directed the Center to develop a scheme after consulting various state governments for creating community kitchens to take care of hunger deaths or malnutrition of children.

The top court was hearing a plea seeking the setting up of community kitchens across the country to address hunger and malnutrition.

A bench headed by Chief Justice N.V. Ramana told Attorney General K.K. Venugopal, “See, if you want to take care of hunger, no Constitution, law or court will say no. My suggestion again is… Already we’re delaying, so further adjournments won’t help… We’ll give you a final time of two weeks, please hold that meeting (with state governments to develop a scheme).”

The Additional Solicitor General, representing the Center, submitted that the issues which are raised in the writ petition with regard to creating community kitchens to take care of hunger deaths or malnutrition of children are under active consideration of the Center, which is awaiting expert reports on the subject.

During the hearing, the top court was informed that incidents of hunger deaths and malnutrition of children have been reported from five states – Uttar Pradesh, Madhya Pradesh, Maharashtra, Odisha and Bihar.

The Chief Justice told the Center that “people are dying of hunger and malnutrition is a separate issue, do not mix them,” adding that it is not bothered about the international malnutrition index, but its only aim is to curb the hunger issues in the country.

The bench said that for any welfare state, the first responsibility is not to allow people to die of hunger.

After hearing detailed arguments in the matter, the top court said that it will grant three weeks’ time to the Central government to come up with some scheme, which is agreeable to various state governments.