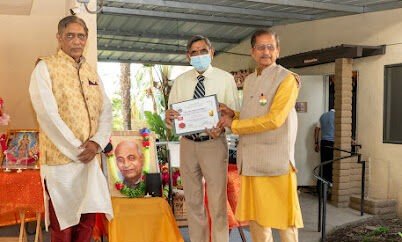 Keshav Patel, president of VHPA-LA, said, on the occasion, “Let us learn lessons of hard work, national integrity, and visionary with simple life of the ‘Iron Man and Architect of Republic of India’ Sardar Vallabhbhai Patel, who sacrificed many things for the sake of the nation.” (photo provided)

ANAHEIM, Calif. – Vishwa Hindu Parishad of America, Los Angeles chapter, celebrated the birthday of Indian leader Sardar Vallabhbhai Patel as “Bharat Ekta Diwas” (India Unity Day) along with a Diwali celebration Nov. 7 at the Gayatri Chetna Center here. The event, attended by a large number of Indian Americans, was organized by Vishwa Hindu Parishad of America-Los Angeles in coordination with regional gurudwaras, Jain Derasar, and Buddhist temples of Southern California, according to a press release.

Radhika Patel, co-chair of the event, invited the group’s chairman Kaushikbhai Patel for a prayer and welcome address, followed the traditional lamp lighting ceremony by all the dignitaries and representatives of various faiths.

Mayor of La Palma Nitesh Patel and councilman Naresh Solanki honored the community leaders with certificates of recognition through their representatives on behalf their cities. Prof. Keshav Patel, president of VHPA-LA, recognized and honored the leaders of the religious organizations who participated in the event as well as prominent community leaders and the performers with certificates of recognition.

Students of the Savithri Arts Academy presented a dance by Sita Swayamber, directed by Sinduri Jayasinghe; and a youth team from the Walnut Gurudwara performed a Bhangra dance to the delight of the audience, noted the release. Two classical dances were presented by the Jagruti group, and Dimple Kaur, director of Sumangali Art of Applied Natya Therapy, impressed with her thoughts about art therapy, religion and unity, it added.

Keynote speaker Ajay Shah, president of Vishwa Hindu Parishad, USA, spoke about significance of Diwali to not only Hindus but to many other religions as well. He said Diwali is celebrated all over the world as it symbolizes triumph of light over darkness as well as acceptance of knowledge over ignorance.

Keshav Patel added, “Let us learn lessons of hard work, national integrity, and visionary with simple life of the ‘Iron Man and Architect of Republic of India’ Sardar Vallabhbhai Patel, who sacrificed many things for the sake of the nation.”

Pravin Sedani, Aravind Patel and Surekha Modi later entertained the audience with a rendition of beautiful songs, as Nila Parikh read out a congratulatory message from the chief minister of Gujarat to the audience.

Harkishan Vasa made a request to the attendees to open their hearts with a donation towards arranging 10,000 food packets for needy poor people.