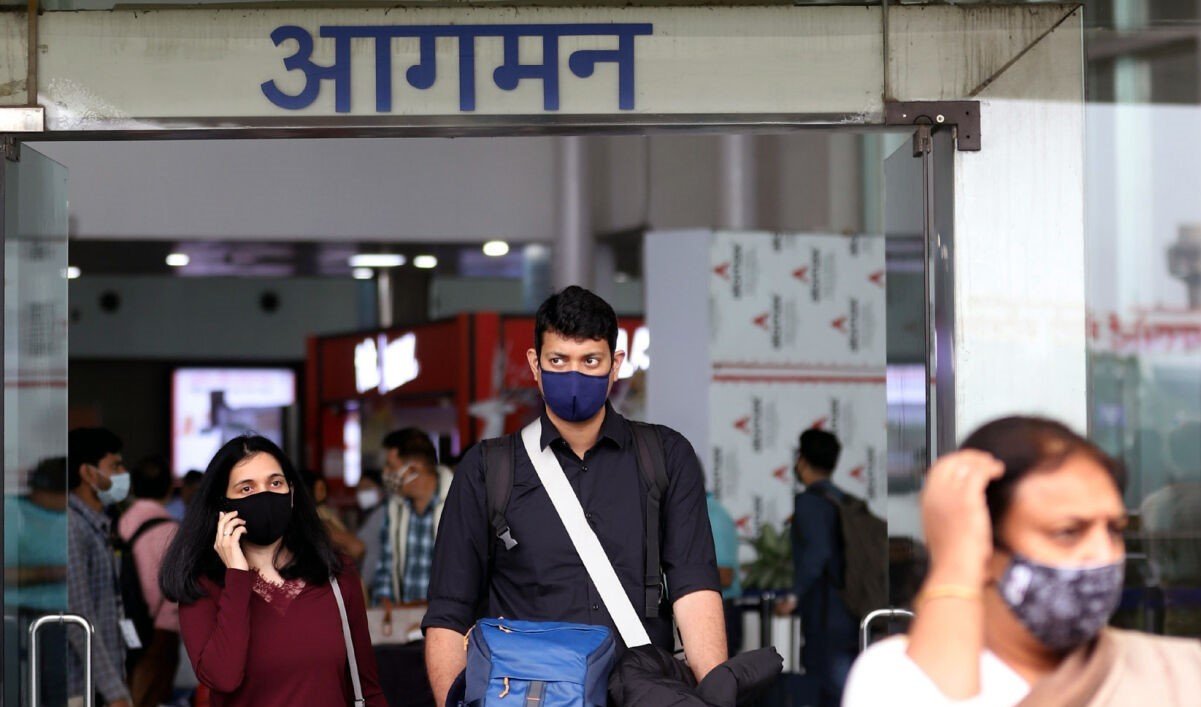 Passengers maintain COVID-19 protocols at Lucknow airport as the state government decided to intensify surveillance and increase RT-PCR tests at the airports, railway stations, and bus stands following the precautionary measures of a new variant ‘Omicron’, in Lucknow Dec. 2.

state government decided to intensify surveillance and increase RT-PCR tests at the airports, railway stations, and bus stands following the precautionary measures of a new variant ‘Omicron’, in Lucknow Dec. 2. Dr. Ashish Jha, Indian American Dean of Brown University School of Public Health, meanwhile, commented on Twitter: “Our vaccines MAY take a hit but will still provide some (may be a lot) protection. We are in a MUCH better place. This isn’t March 2020.” (ANI photo)

NEW DELHI (AP) — India on Dec. 2 confirmed its first cases of the omicron coronavirus variant in two people and officials said one arrived from South Africa and the other had no travel history. A top medical expert urged people to get vaccinated.

The Health Ministry said the cases involved two men in southern Karnataka state, a 66-year-old man who had traveled to India from South Africa and a 46-year-old doctor.

Hundreds of contacts of the two men have been traced and tested for the virus and at least five people have tested positive for the virus.

Much remains unknown about the new variant, including whether it is more contagious, as some health authorities suspect, whether it makes people more seriously ill, and whether it can thwart the vaccine.

India has already classified several countries as “at risk” in response to the omicron variant, and travelers from those countries are being tested after they arrive in India. In addition, India is testing 2% of all other international travelers randomly. Genome sequencing is also being done to detect the variant. India has tested nearly 8,000 passengers since Dec. 1.

Health officials told the 66-year-old man who tested positive to self-isolate in the hotel where he was staying because he had no symptoms.

The man tested himself again privately on Nov. 23 and after receiving a negative result traveled to Dubai on Nov. 27, state health officials said.

None of his contacts have tested positive for the virus so far, officials added.

The 46-year-old doctor was tested on Nov. 22 after he had a fever and his body ached, officials said. He self-isolated the same day and five of his contacts tested positive afterward and have since been isolated.

“Increased vaccine uptake is the need of the hour. Don’t delay in getting fully vaccinated,” he said.

Dr. Chandrakant Lahariya, a health policy expert, said the focus should be on finding the unvaccinated and making sure they receive shots. “Some of the hesitancy may disappear on the news of the new variant. But this can’t be taken for granted,” he said.

Some Indian states have issued strict restrictions on international arrivals as precautionary measures, including mandatory COVID-19 tests for those coming from South Africa, Botswana and Hong Kong.

More than 56% of Indians have received at least one vaccine dose — 32% are fully vaccinated and 24% have received a single shot, according to Our World In Data.

India-West Staff Reporter adds: Dr. Ashish Kumar Jha, Indian American Dean of the Brown University School of Public Health, replying on Twitter as to a question of whether it’s possible the omicron variant will set us back to square one, said: “No. We have lots of tests that’ll detect Omicron. We have therapies that’ll work. Our vaccines MAY take a hit but will still provide some (may be a lot) protection. We are in a MUCH better place. This isn’t March 2020.”

(Associated Press writers Krutika Pathi and Sheikh Saaliq in New Delhi and Aijaz Rahi in Bengaluru contributed to this report.)