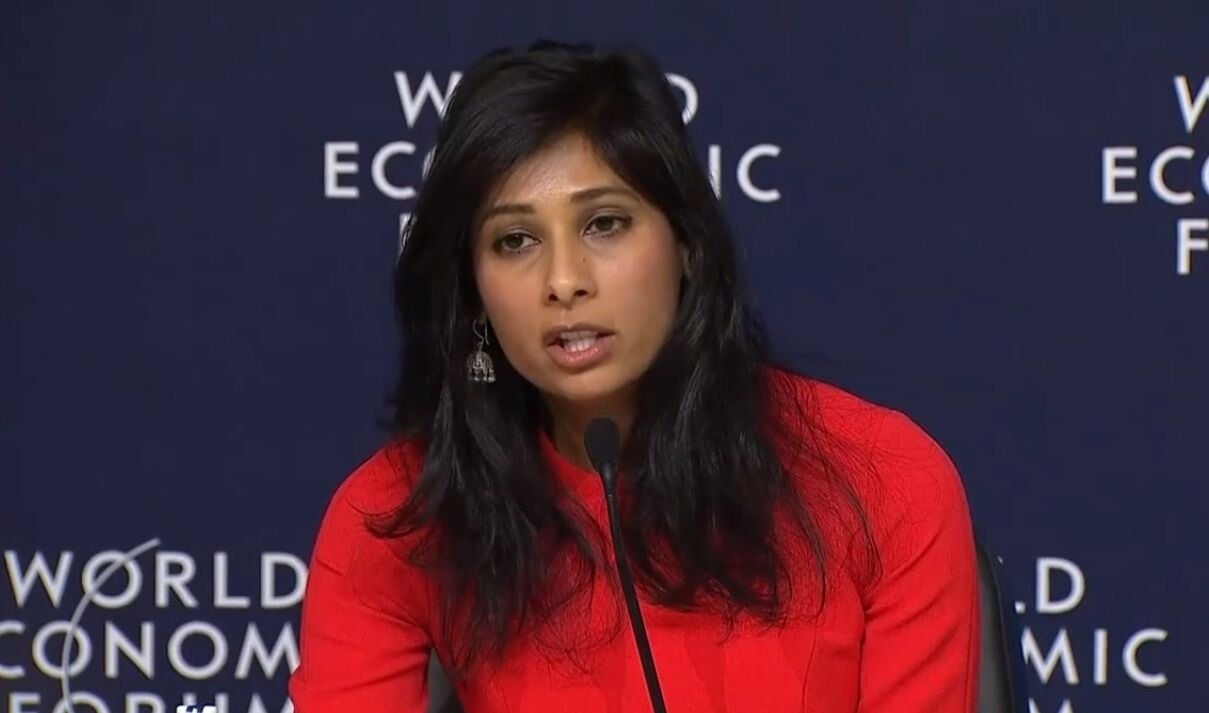 Gita Gopinath’s new appointment was unexpected as she said in October that she had planned to return to Harvard University in January 2022. The Indian American economist is seen here speaking at a news conference in Davos, Switzerland, on Jan. 20, 2020. (IMF/IANS photo)

WASHINGTON – The International Monetary Fund has announced that Gita Gopinath, currently chief economist of the IMF, is set to succeed Geoffrey Okamoto as the institution’s First Deputy Managing Director early next year.

“Especially given that the pandemic has led to an increase in the scale and scope of the macroeconomic challenges facing our member countries, I believe that Gita … has precisely the expertise that we need for the FDMD role at this point,” Xinhua news agency quoted IMF Managing Director Kristalina Georgieva as saying.

“Indeed, her particular skill set – combined with her years of experience at the Fund as Chief Economist – make her uniquely well qualified. She is the right person at the right time,” Georgieva said.

Georgieva also noted that some realignment in the roles and responsibilities of the IMF’s senior management team is being undertaken. In particular, the FDMD will take the lead on surveillance and related policies, oversee research and flagship publications and help foster the highest quality standards for Fund publications.

Gopinath, an Indian American, will start in her new position as FDMD on Jan. 21, 2022, according to the IMF.

Prior to joining the IMF as chief economist in early 2019, Gopinath was the John Zwaanstra Professor of International Studies and Economics in the economics department of Harvard University.

“I am honored and humbled to become the IMF’s next FDMD,” Gopinath said in a statement. “As the pandemic continues its grip on us, the work of the Fund has never been more critical and international cooperation never more important.”

Gopinath’s new appointment was unexpected as she said in October that she had planned to return to Harvard University in January 2022.

Okamoto, who was appointed FDMD of the IMF in March 2020, plans to leave the IMF and return to the private sector early next year, according to the IMF.

“It’s been a privilege to be entrusted with leading the IMF during a period of crisis and an honor to serve alongside the world’s best minds tackling the world’s most complex economic issues,” Okamoto said.