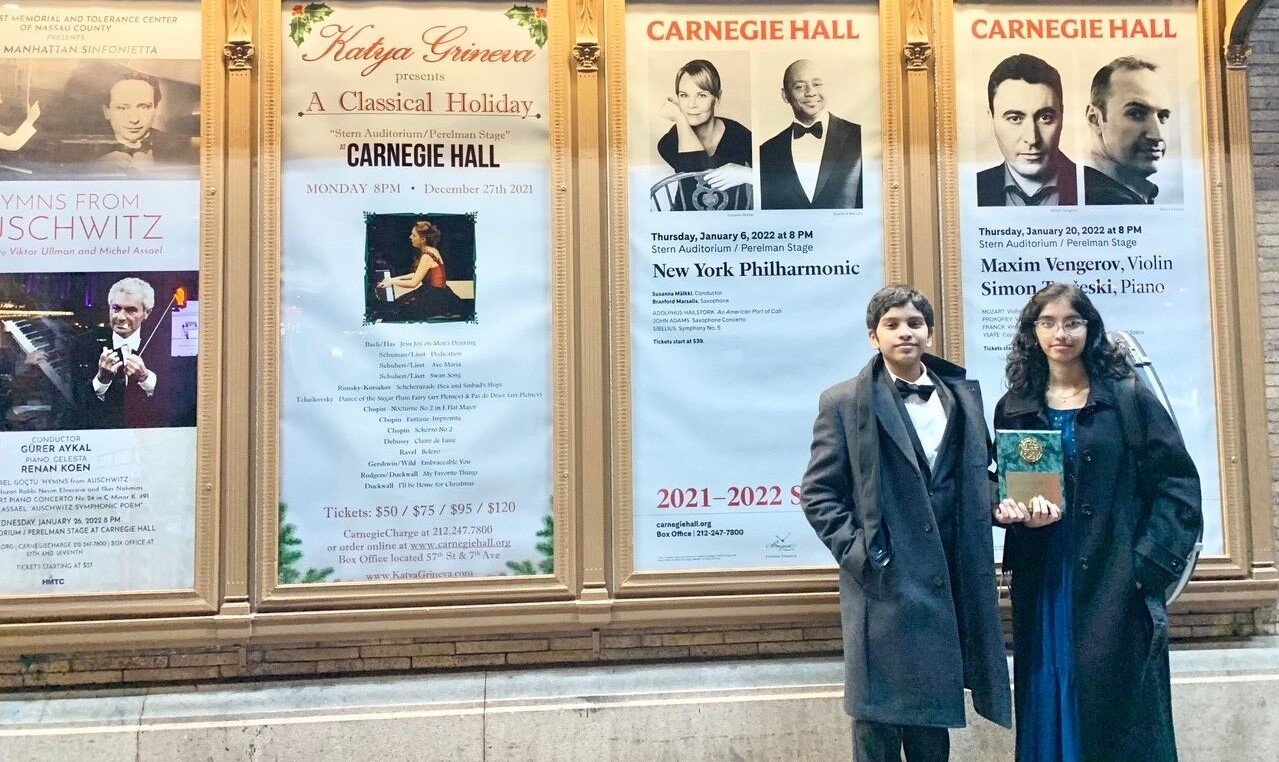 Samuel and Sarah Parigela in front of Carnegie Hall where they performed on Dec. 3. (photo provided)

Two talented Indian American siblings, Sarah Parigela, 17, and Samuel Parigela, 12, from Irvine, California, performed at the prestigious Carnegie Hall in New York on Dec. 3, according to an email received by India-West.

After a long COVID shutdown, this world-famous concert venue was reopened only recently for public performances, noted the press release.

At the concert, Sarah performed a virtuosic violin piece by Polish composer Henryk Wieniawski with Samuel delivering the elegant piano accompaniment to the ovation of the classical music aficionados.

Sarah, a high school junior, attends a strings music conservatory at a charter school in Orange County, California. She has won many awards and accolades over the years, including winning an international virtuoso competition, said the release. She has performed at various famous concert halls as a concertmaster and principal including a nationally televised performance for 2019 ESPYs (sports awards) at Microsoft Theatre.

Though Sarah is a classically trained violinist, she plays cello, piano, and guitar. She also arranges music for special events involving trios, quartets, and orchestra.

The young high schooler founded a music charity with a friend to teach classical music to underprivileged children in Orange County, as well as to donate instruments to underfunded music programs. She also represents her school in the Science Olympiad.

Samuel attends the music conservatory with his sister. This quiet but assertive high school freshman has mastered complex topics at the tender age of 12. He is an authority on everything from geography to theology and literature to politics, said the release.

Samuel has been training on piano and violin in classical music but also has a strong penchant for singing. He was recognized by his teachers and peers for his precociousness and mentorship to his peers from the very young age of 6.

The sister-brother duo regularly performs at homeless shelters and rescue missions, bringing joy to many through the power of music. They released an album this year and produce music on various channels during their free time.

They have also recorded over 50 songs on YouTube that have been viewed by over 2 million from 100+ countries and counting. What motivates them most is not the round of applause at the concert halls, but the quiet conversation with a homeless mother who rediscovered her passion after watching them play and a comment online by someone who was touched by listening to their music, noted the release.