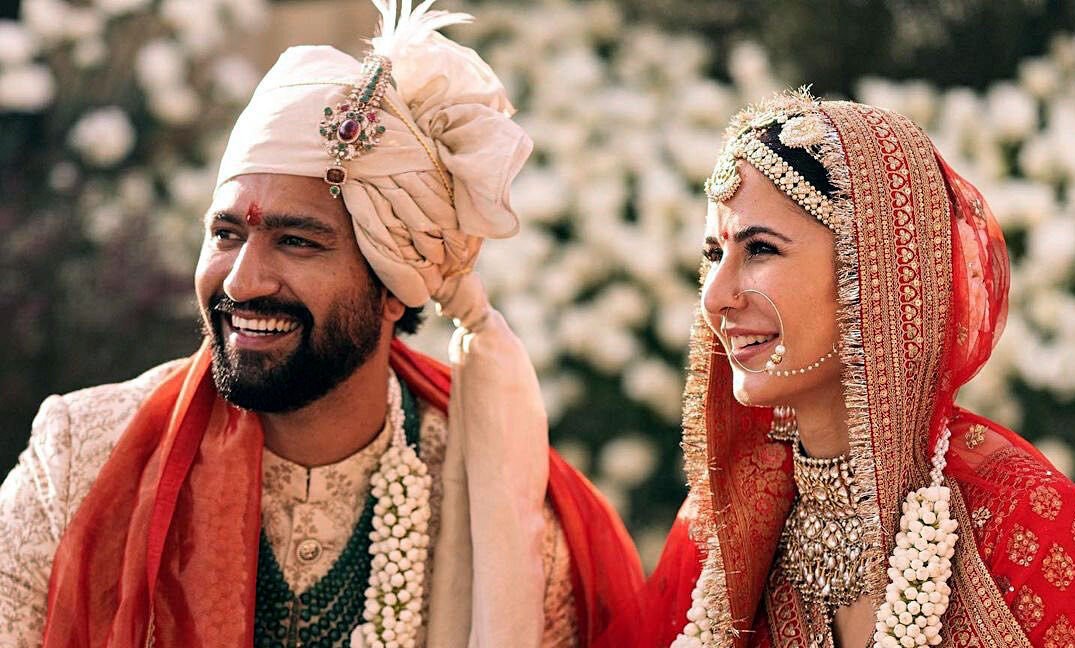 MUMBAI – Indian actors Katrina Kaif and Vicky Kaushal have been pronounced man and wife after one of the most celebrated marriage ceremonies of the year.

The celebrity couple tied the knot at a private ceremony in the Six Senses Fort Barwara Hotel, Sawai Madhopur, Rajasthan, Dec. 9 with friends and family in attendance. The initial photographs show Vicky following Katrina and then the two waving at the paparazzi gathered at a distance from the venue.

Katrina wore a bridal lehenga crafted by ace designer Sabyasachi Mukherjee for her special day, Vicky is said to have worn a beige sherwani after his ‘sehrabandi’.

The couple also made it official that they would soon host a reception in Mumbai for those who were not invited to the very private marriage ceremony at Sawai Madhopur.

Vicky headed to the mandap in a vintage car with his baraatis, including brother Sunny Kaushal, good friend Angad Bedi and members of his family. The couple took the pheras in the traditional way, thus bringing to an end the celebrations that took off on Dec. 7.

The pre-wedding festivities started officially when Bollywood celebrities and close friends of the couple, such as Kabir Khan, his wife Mini Mathur and their daughter Sairah left Mumbai for Jaipur. Angad Bedi, Neha Dhupia, Sharvari Wagh, Radhika Madan and Malavika Mohanan followed suit and pumped up the tempo of the celebrations.

The guests were extended a grand welcome, served Rajasthani and Punjabi delicacies, even as the venue lit up the Sawai Madhopur skyline and fireworks added to the dreama.

The ‘mehendi’ celebrations saw 20 kilos of GI-tagged henna sourced from Sojat by the river Sukri in Rajasthan.

The ‘haldi’ ceremony followed, with the guests faithfully following the yellow dress code. This was when the media first got a glimpse of the guests in the corridors of the luxury hotel. After the pictures surfaced on the Internet, the organizers put up curtains on the arches of the fort-hotel to protect the privacy of the guests from prying cameras.

The ‘sangeet’ night was held on Dec. 8 with Gurdas Maan, Hardy Sandhu, Shankar Mahadevan, Ehsaan Noorani and Manj Musik belting out their music to entertain the select company.

Moments after Katrina and Vicky went public with their wedding pictures on Instagram, Bollywood celebrities lined up to shower their good wishes upon the couple.

In the caption to the photographs that they shared on their respective Instagram accounts, the newly-weds wrote: “Only love and gratitude in our hearts for everything that brought us to this moment. Seeking all your love and blessings as we begin this new journey together.” Here’s a sampler of how Bollywood responded:

Priyanka Chopra: “So happy for you! Mere yaar ki shaadi hai! Congratulations to both of you! Ure perfect together.”

‘Man Marziya’ screenwriter Kanika Dhillon: “Omg! SOOOOO beautiful!! Wish u both a beautiful happily ever after!”

Parineeti Chopra: “KATYYYYY – only love and more happiness to youuuuu!”

Other celebrities such Hrithik Roshan, Anurag Kashyap and Tiger Shroff commented with emojis.