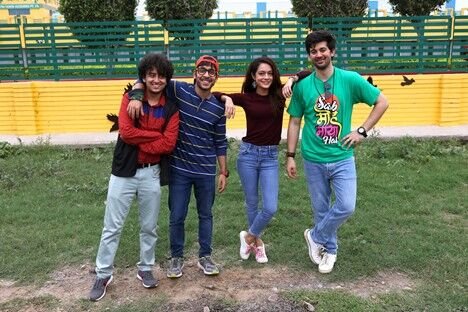 “Velle” is a Hindi remake of the Telugu blockbuster, “Brochevarevarura,” (publicity photo/Universal Communications)

A Hindi remake of the Telugu blockbuster, “Brochevarevarura,” the pan-Indian version pans out (I am told by someone reliable who watched the original) as more of a “worse”-ion. To be sure, there are some redeeming features: some of the lines are genuinely hilarious, as are a few intermittent situations. The songs, “Uddne Do,” “Udd Chaliya,” Sohail Sen’s “Khayali Ishq” and Rochak Kohli’s “Yaaron Ka Bulaawaa” are interesting. Lyrically, “Raakh Ka Dariya” is well-penned.

Karan Deol as Rahul puts in a decent performance—still a shade raw, but few get a break as superb as his dad did in “Betaab” and this is only his second film. He should primarily work on his expressions, which are good only in some situations. His body language is good for his character.

As his friends, Visshesh Tiwari as Raju and Savant Singh Premi as Rambo, are both excellent. Zakir Hussain as the principal is effective and Anya Singh and Mouni Roy are decent as Riya and film star Rohini respectively.

The story is about three high-school slackers joined by a fourth, Riya, the daughter of the high school principal. Riya wants to master dance but her father is bent on academics for her. So the four stage Riya’s kidnapping stunt, but some real gangsters abduct her later. On a parallel track, filmmaker Rishi plans a film with top star Rohini. The slacker-gangster-filmmaker tracks collide.

As a comedy, though the humor is clean, there is a too-conscious effort to infuse fun at times, and the screenplay is too full of coincidences in the second half. It also does not explain why Radhe Shyam suspects the three slackers as the criminals.

Also, all the characters are named with “R”—not just the “Velle” (slackers) Rahul, Rambo, Raju and Riya but also principal Radhe Shyam (Zakir Hussain) and filmmaker Rishi Singh (Abhay Deol). Anuraag Arora is gangster Randhir and Rahul’s rich father (Mahesh Thakur, over-the-top) is Ravikant. The minor characters also are named with “R,” and to put curiosity at rest, the two Deols have a few moments of an action face-off but are otherwise not really seen together.

If you are sitting “Vella” (idle), this is a time-pass fare. Otherwise, you have the option to skip it. You won’t miss much.