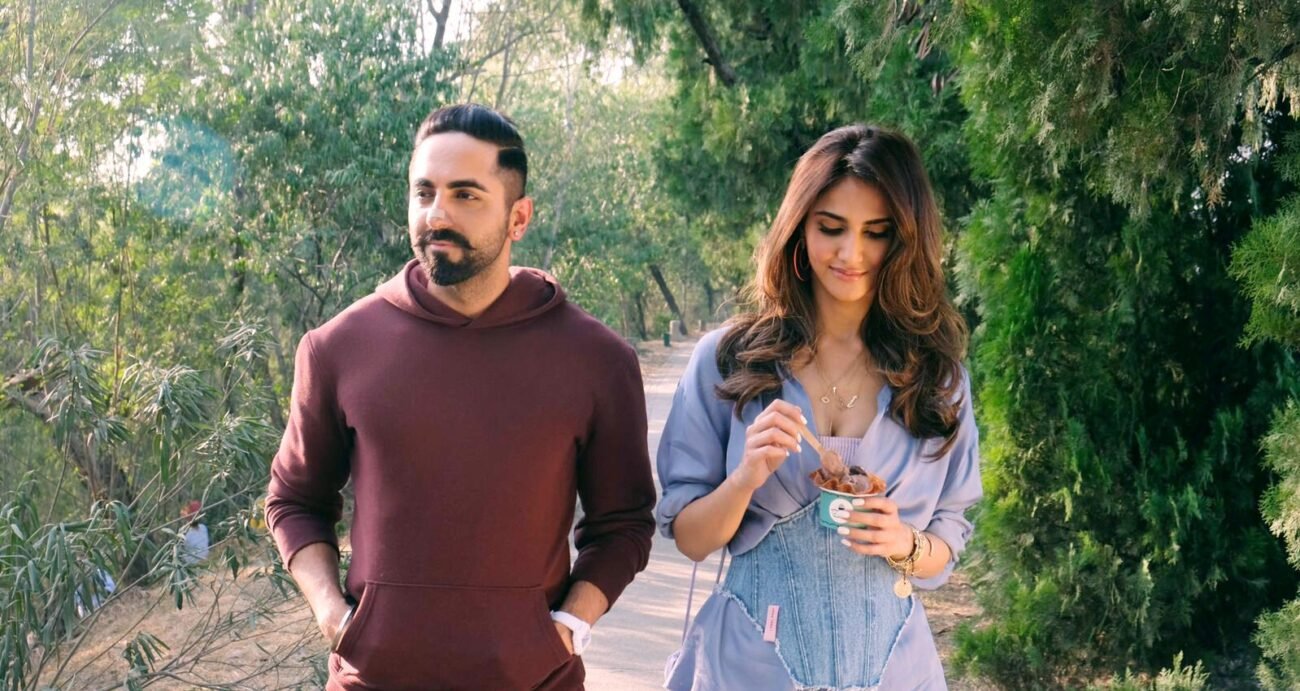 Presented by: Guy in the Sky Pictures & T-Series Films

MUMBAI — When a film is neither a remake nor a sequel, filmmakers often forget that freshness in the entertainment is the vital key that opens the box-office lock, even when an older wine is served in a new bottle. And that makes it doubly creditable when this bottle itself is new and fresh, served with an element of complete surprise even when the genre of the film is not a crime drama or a thriller.

Midway through the crisp 117-minute film, therefore, “Chandigarh Kare Aashiqui,” seemingly a routine contemporary love story with elements of humor and a family background, springs a vital and pleasant surprise. The hint of a secret because of which Maanvi Brar (Vaani Kapoor) is the bête noire of her mother (as shown by a sequence with her army officer father Maninder, played superbly by Kanwaljit Singh) is more than cinematically justified when Maanvi opens up.

After a hot physical attraction between her—she is the Zumba teacher in a family gym—and the gym owner Manu Munjal (Ayushmann Khurrana) that leads to love and loads of sex, she reveals that she was born a boy and was a disturbed soul until she went in for a sex-change operation, supported only by her father. Manu is disgusted and devastated, being unaware of the intricacies of the process. He thinks he has made love to a boy and abuses and threatens her. His “besties,” the twins Jomo and Riz (Goutam Sharma and Gourav Sharma) offer every kind of support to the shattered Manu.

Manu’s family, who has taken to Maanvi after one meeting, assumes prematurely that they are in love and his sisters join the former’s Zumba classes in the family gym. Manu is preparing for a body-building contest that he has lost twice to Sandy (Abhishek Bajaj). All this happens before the blow strikes.

Meanwhile, for a family wedding, Maanvi’s parents come to Chandigarh and after the ceremony, her father suffers a massive heart attack. Maanvi, who has faced setbacks because of her firm decision, starting at home with her mom and relatives and a past love affair, is doughtily facing the latest challenge. All she has for support, other than her dad, is a tough friend, Akshita (Karishma Singh). What happens next?

A progressive story that breaks stereotypes, “Chandigarh Kare Aashiqui” (a broad title as the story had to have a name that did not reveal the theme, a la the recent “Rashmi Rocket” that was also not a typical sports story) adds to the list of socially revolutionary and bold subjects that Khurrana has chosen in his decade-old career. After the terrible “Gulabo Sitabo” this finds Khurrana returning to form in his chain of immaculate performances in a parade of socially significant, modest entertainers.

The film also has director Abhishek Kapoor springing a massive surprise after films that did not go anywhere, except for the interesting “Rock On!!!” (2008). In a cavalcade of flops and also-rans like “Aryan: Unbreakable,” “Kai Po Che!” (touted as a success), “Rock On 2,” “Fitoor” and “Kedarnath,” this time his work glitters indeed. Many times, directors need a checkered innings before finding their métier, and one hopes that Kapoor finds his niche “ASAP,” for this film shows what Kapoor is capable of when he gets down to it.

That said, the writing is excellent (one writer’s name I missed for the story credit, because no site mentions the person) but for some convenient elements—like a relative clearly able to overhear a crucial, confidential conversation between a doctor and her patient towards the end, and the abruptness with which the mother-daughter problem is solved.

The best writing parts are the gritty lines by Maanvi to Manu and her reaction to his threats and his outburst when he confides his shortcomings to her. The predictable sports finale is, for once, justified in the way it pans out, though it is again quite convenient in the way the Munjal family’s internal conflicts are solved.

Such a film would have lost its moorings with indifferent or poor performances and that is where again Kapoor scores in extracting fine essays by all the significant characters, like even Satwant Kaur as Maanvi’s mother and Anjan Srivastava as Manu’s grandfather. Sawan Rupowali and Tanvi Abrol as Manu’s typical conservative-meets-modern sisters, gregarious supports as well as pestilential nuisances, and Girish Dhamija as Manu’s father are also excellent.

Superlative essays come from the real-life twins, Gourav and Goutam Sharma, and Karishma Singh as Maanvi’s emotional anchor through thick and thin. But by far the stunner in the team is Vaani Kapoor, hitherto known as the glamour girl of “War” and more. In a fantastic performance that relies almost completely on facial expressions and body language AND is aided by superb lines, she becomes the lifeline of the film, dwarfing even the consummate Khurrana.

Sachin-Jigar’s BGM is serviceable, the songs “Kheech Te Naach” and “Maafi” appealing and the omnipresent Punjabi overdrive for once does not go beyond limits as here is where this flavor is justified in the present-day obsession with authenticity. Even a few Punjabi dialogues have Hindi subtitles, which is highly welcome.

A film that should not be missed both for its content and entertainment quotient, “Chandigarh Kare Aashiqui” is a movie to take home and after Hindi cinema’s recent array of post-“Sooryavanshi” duds, re-instills faith in the movies.