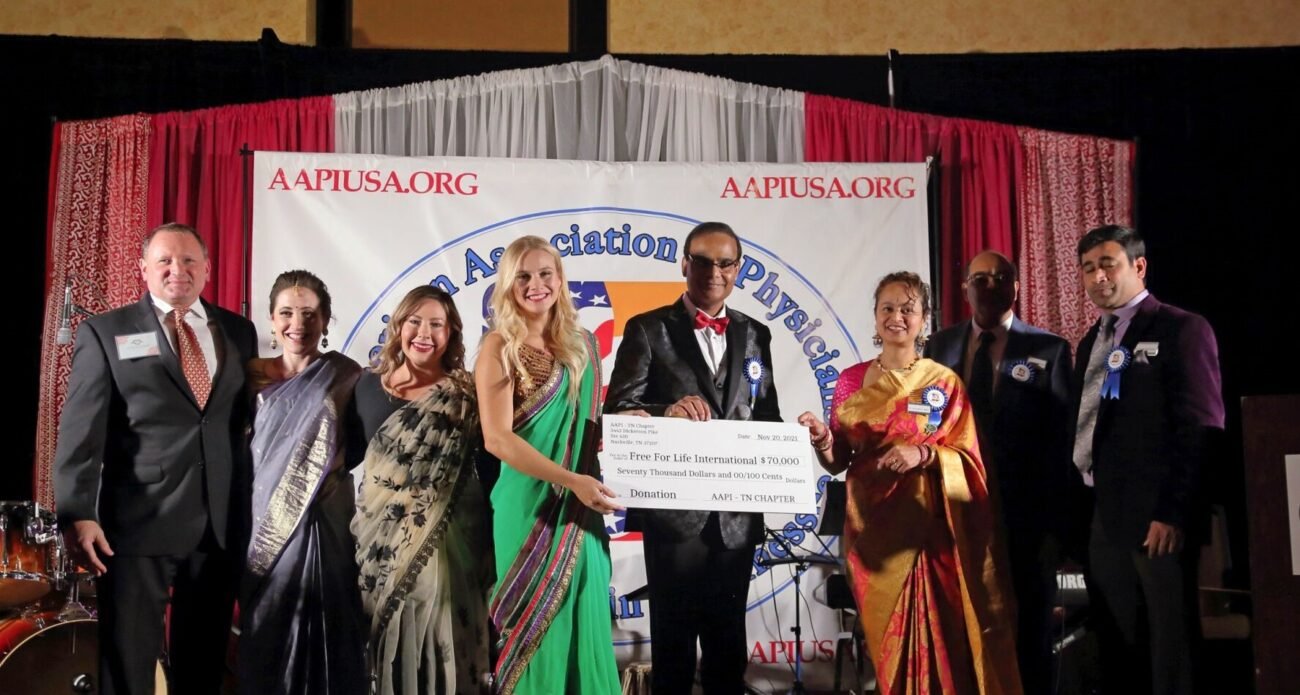 At the fundraiser gala in Franklin, Tennessee, the AAPI-Tennessee chapter presented a check for $75,000 to Free for Life International. “We as a community have a duty to end the various forms of slavery,” Anuradha P. Mann, Indian American AAPI Tennessee chapter president, said. (photo provided)

During the American Association of Physicians of Indian Origin Fall Governing Body Meeting, a fundraiser gala was held Nov. 20 at the Embassy Suites in Franklin, Tennessee, during which the host chapter, AAPI-TN, presented Free for Life International with a check for $75,000 to help strengthen efforts to end human trafficking and to help continue and expand their impact in India.

While pointing out that human trafficking is one of the fastest growing criminal industries in the country, reported in all 50 states of the United States, “we as a community have a duty to end the various forms of slavery,” AAPI Tennessee chapter president Anuradha P. Mann said. “FFLI works in prevention along with rescue, restoration, rehabilitation and education of trafficked victims, we are pleased to present this token of our appreciation to help support the efforts of FFLI,” the Indian American physician added.

The underlying theme of Diwali, celebrating light over darkness, victory of good over evil, and knowledge over ignorance, was reflected in the traditional lamp that was lit on the occasion, said a press release.

In his keynote address, Congressman Jim Cooper from Nashville highlighted the numerous injustices that intersect with human trafficking and exploitation, along with the urgent need for action at the state, national, and international levels.

The AAPI-TN chapter, at the event, donated $10,000 to the national AAPI’s Endowment Fund.

In related news, in preparation for the upcoming 40th annual convention from June 23-26, 2022 in San Antonio, Texas, with the theme, “Heal The Healers,” and to create awareness among the public on the need for a healthy lifestyle, the AAPI Convention team joined a “Rock and Roll Marathon” Dec. 5 in San Antonio, Texas.

AAPI’s participation at the marathon was inspired and sponsored by the Botla Foundation, which provided a great kickstart to AAPI’s wellness theme, said the release.

The Botla Charitable Family Foundation is a nonprofit established in 2014 by Dr. Ravi and Vijaya Botla with the intention to give to charitable causes that highlight Indian culture and traditions as well as promote health and wellness in the Indian American community.