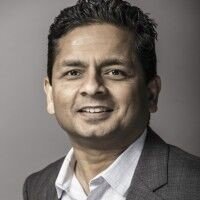 “We are eternally grateful for the magnificent leadership that Rajiv Jain has displayed in his short time here at Akshaya Patra USA as interim CEO,” said Sivaram. “His steady hand and tireless work ethic have helped to make 2021 another successful year for our organization. We are thrilled to have Navin Goel join our team. His leadership experience and passion for philanthropy will no doubt prove instrumental to our future success as we look forward to continuing our mission to ensure that no child is deprived of education due to hunger.”

Jain served as Akshaya Patra’s Interim CEO for the past 6 months. “It has been my privilege to serve Akshaya Patra which is a beacon of light for millions of children in India and I will continue to work with the organization behind the scenes as I pass the torch to Navin,” said Jain.

Goel joins Akshaya Patra after a successful career as former CIO of Capgemini, a global leader in consulting, technology, and outsourcing services. He was also the former chairman and CEO of Sogeti USA, a subsidiary of Capgemini.

“I am honored to serve and extremely humbled to join Akshaya Patra USA as the new CEO,” said Goel. “I look forward to working with our individual and corporate supporters, alongside our chapters across the United States. Together we will continue to work towards a mission of sustainability and growth ensuring that no child is deprived of education due to hunger.”

Born and raised in Rourkela, Odisha, Goel and his family have resided in Dayton, Ohio for 33 years.

Goel has a bachelor’s degree in Computer Science from The Indian Institute of Technology, Kanpur, and graduated from Ohio State University with a Masters of Computer and Information Science. He is also a Trustee of the Hindu Temple and supports spiritual study and meditation.

Established in 2000, Akshaya Patra is the world’s largest NGO school meal program, providing hot, nutritious school lunches to over 1.8 million children in over 19,257 schools through 58 kitchens in 12 states and two Union Territories in India.