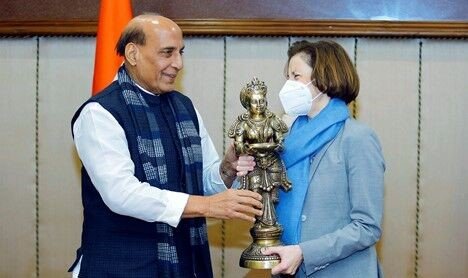 NEW DELHI (AP) — India and France on Dec. 17 discussed future collaboration and co-production of defense equipment during a visit by the French defense minister, officials said.

Florence Parly and her Indian counterpart Rajnath Singh expressed their commitment to increase defense cooperation in all domains, India’s Defense Ministry said in a statement.

The statement gave no details, but Parly in an interview with The Times of India newspaper ahead of Friday’s talks said she would reiterate France’s commitment to offer the best of its defense technology with a high “Make in India” component.

France describes India as its “main partner” in the Indo-Pacific region shaken by concerns over the growing influence of China. France expressed its resolve to expand strategic cooperation with India after it was angered by being left out of a nuclear submarine deal with Australia, which in September announced a new security alliance with Britain and the United States.

India and France are increasingly engaged in maritime security in the Indo-Pacific region, counterterrorism, as well as discussions over climate change, renewable energy and sustainable growth and development, according to India’s External Affairs Ministry.

France has emerged as a major source of foreign direct investment for India with more than 1,000 French companies already active in the country. France is the seventh-largest foreign investor in India with a cumulative FDI stock of $9 billion from April 2000 to December 2020. There are more than 150 Indian companies operating in France.