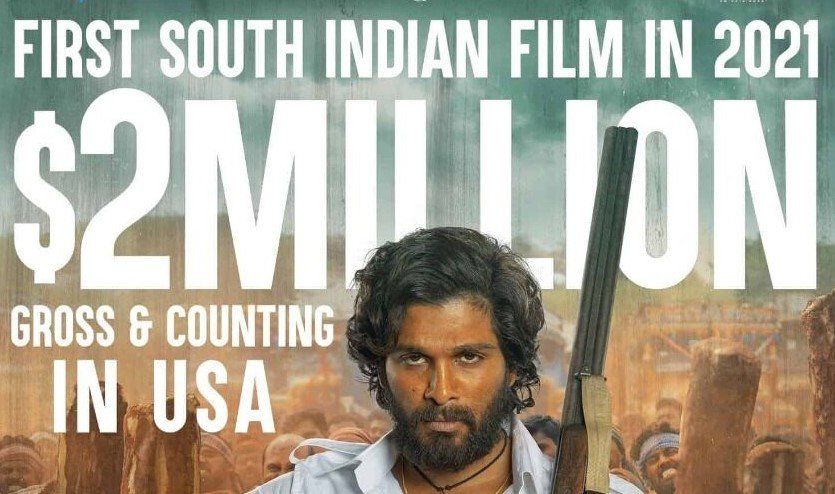 HYDERABAD – Allu Arjun’s ‘Pushpa: The Rise’ is being screened with house full occupancy in both domestic and international circuits.

It was earlier reported that during ‘Pushpa’s one-week run, this action thriller collected a gross of around Rs. 196 crores at the box office.

Now that the makers have announced the movie’s huge success in the U.S., ‘Pushpa: The Rise’ is said to have joined the $2 million club in the United States in terms of collections.

A tweet on the official Twitter account of the film, which goes by the handle @PushpaMovie, shared that it is the first South Indian film of 2021 to hit the $2 million benchmark in the U.S.

It is to be noted that ‘Pushpa’ marks the second movie to collect such a huge amount in the U.S. after ‘Ala Vaikuntapuram Loo’.

As per reports from the U.S. on Dec. 24, ‘Pushpa’ collected a total of $2,001,022 at the U.S. box office. Despite the mixed talk about the movie, the movie has attained this rare feat, creating much market flow overseas.

Buoyed with the success of ‘Pushpa’, the team has been celebrating as they have been traveling to meet the fans from different cities of India.

Helmed by Sukumar, Devi Sri Prasad has scored the music for ‘Pushpa: The Rise’. Rashmika Mandanna plays the female lead, while Kerala’s superstar Fahadh Fassil appears in a significant role.