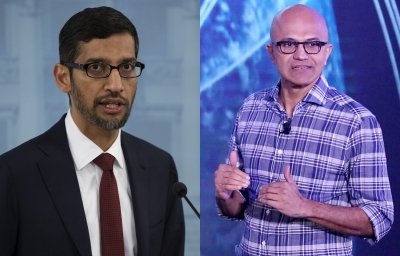 NEW DELHI (IANS) – India,on Jan.25 announced 128 Padma awards, including four Padma Vibhushan, 17 Padma Bhushan and 107 Padma Shri awards, on the eve of the country’s 73rd Republic Day.
Among the recipients are a few well known IndianAmericans including actress and doyen of Indian cuisine Madhur Jaffrey, Microsoft CEO Satya Narayana Nadella and Google’s Sundar Pichai. Jaffrey received the Padma Bhushan in the field of Culinary Arts while Pichai and Nadella received the Padma Bhushan for their achievements in Trade and Industry.
Out of the 128 Padma awardees, 13 are posthumous, 34 are women, while 10 persons are from the category of foreigners, NRIs, PIOs and OCIs.

Apart from these, a total of 107 Padma Shri awards have also been announced for eminent persons in the fields of Art, Trade and Industry, Literature and Education, Sports, Civil Services and others.

The Padma awards, the highest civilian awards of the country, are conferred in three categories, namely, Padma Vibhushan, Padma Bhushan and Padma Shri.