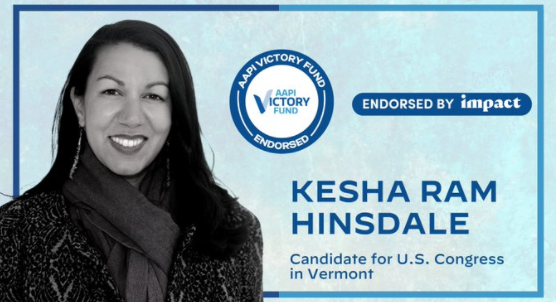 In it, AAPI Victory Fund founder and chairman Shekar Narasimhan said, “As elected leaders and champions for the progressive movement in their respective states, Nida and Kesha have made strides for not only the AAPI community but for all of their constituents. They continue to dedicate themselves to ensuring that progress leaves no one behind.We are honored to endorse these two exemplary candidates who will make history when elected to Congress as they strive to make a positive impact on our country.”

Indian American Impact Fund executive director Neil Makhija said, “As IndianAmericans, Nida and Kesha’s bids for public office serve as a reminder that IndianAmericans are deeply underrepresented in American government. The historic strides that they’ve made in their respective states are just the beginning for IndianAmerican and AAPI communities to have a seat at the political table, and we’re excited to see how they continue to prioritize marginalized communities come midterms, and beyond.”

Current Durham County Commissioner and now candidate for the U.S. House of Representatives in North Carolina’s 6th Congressional District, Nida Allam while acknowledging the endorsement said, “I’m proud to be supported by these champions for our community. As a Member of Congress, I’ll fight for the progressive policies that working families across North Carolina need.”

Vermont state senator Kesha Ram Hinsdale running for congress in her statement said, “If elected as Vermont’s first Congresswoman, I look forward to working with AAPI Victory Fund, Indian American Impact and Representative Pramila Jayapal to build a bigger coalition for racial, economic, and social justice. They have challenged politics as usual, amplifying the voices of underrepresented communities and fighting for the issues that working Vermonters care about.”