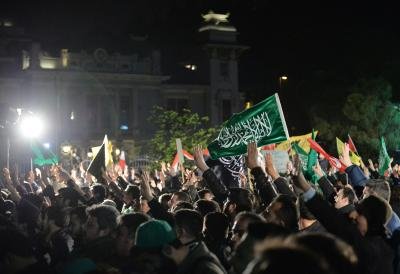 It stands for boycotting the products from the target country, disinvestment from financial institutions, and calling for sanctions by the developed world as well as the US.

Disinfolab said in a latest report that MB revolves around carefully designed hybrid campaigns involving media and ground activists (though the publicity remains the key factor). The more publicity of the conflict, the better prospect of fund collection in its name.

However, having run Palestine’s ’cause’ for decades now, the MB and other fronts have milked the cow as much they could. There must be fatigue setting up, as nothing substantial has ever been achieved other than the fact that more and more activists have been holding more and more conferences and seminars in five-star facilities.

Like everything else, even the conflict industry needs novelty. Added to the fact that a larger Jamaat-led nexus, which was operating the Kashmir conflict industry so far, stands exposed. MB so far has managed to keep nepotism minimized, and provides an equal opportunity to every vulture activist to partake in the booty.

The report said that moreover, MB has over the years built a vast network spreading across Europe and the US (and now increasingly in Australia), which needs funding to survive. It has created generations of individuals whose only qualification is ‘activism’ to maintain their luxurious lifestyle. Hence, there will always be a need for one or more conflict industries.

“For now, Kashmir is ripe. As mentioned, Jamaat has burnt and the Pak establishment doesn’t have resources. Plus, having gone completely into the Chinese sphere of influence, the establishment may not command the same acceptability and access to resources as in yesteryears. Hence, it might not have been difficult for MB to take over the Kashmir ’cause’,” the report added.

To prepare for the Kashmir conflict industry, the homework has been laid down over the years. First, the soft image of India needs to be dented. Campaigns are run to discredit the image of Father of the Nation, Mahatma Gandhi, and his call for non-violence. It goes on to hurt the image of yoga and tea in a sustained campaign, all in the name of human rights/ minorities’ rights/ women’s rights and so on, Disinfolab said.

Secondly, the narrative of ‘Islamophobia’ is pushed, despite the fact the narrative is entirely fabricated and have been repeatedly exposed. In connivance with some willing ‘news media’ including from inside of India, the label stuck. While there is no denying that individual incidences do take place, there has been no attempt whatsoever to provide a data point for such claims. If at all, a series of fake and fabricated documentation have been deployed to cement the accusations.

Selectively hyping individual cases, and giving all incidences a communal colour, the narrative was gradually established.

Thirdly, the narrative of ‘fascist’ was established, which has a high resonance in the West, it added. Human rights violations in Kashmir need to be recycled with fake news and stories.

Fourth, there is a need to create a villain, to replace the soft image of yoga and tea. To this end, the bogey of Hindutva is projected. The propaganda machinery with collusion from domestic elements tried to replace the non-violence image of India with a fascist “also like radical Islamists” narrative, the report said.

Finally, once the Islamophobia and fascism narrative is established, it is time to introduce genocide. Ordinarily, one would require evidence for genocide, and this being the most serious allegation, it is not usually tossed around lightly.

However, if one has the media machinery at its disposal, it is not too difficult to push. Having learnt the art of law-fare in a democratic system, and while incessantly calling India fascist, they have managed to enjoy all the perks and loopholes a democratic country offers.

Other than media enterprise, the MB over the years has also been building ground-level organizations in India. Some of them have been hinted at and some documented, but a significant majority of them still operate below the radar.

Therefore, it is not only capable of hyping any random or fake story, but is also capable of creating incidents on the ground that could be hyped up suitably.

As a corollary to the conflict industry enterprise, it is important for the MB to whitewash the radical Islamists and terrorists. Every terror act needs to be whitewashed in terms of rebel or revenge to create a constant and consistent enemy. And if needed, outright fabrication.

For example, a man killed by terrorists in Kashmir was spun as killed by the Army, and the picture was a poster for many ‘human rights organizations’ and ‘reports’, the report said.

It is no ordinary coincidence that most MB fronts have been found to have direct relations with terror organizations, and even have been funding terror groups. An even bigger achievement of MB is mastering the skills to navigate the legal systems of democratic countries.

Despite several MB fronts getting exposed for their linkages with terror groups, and even having funded such groups, they have managed to escape any harm. All they need to do is change the name of the front. And with a liberal dose of ‘Islamophobia’ as their defense, they have managed to blunt the attacks.