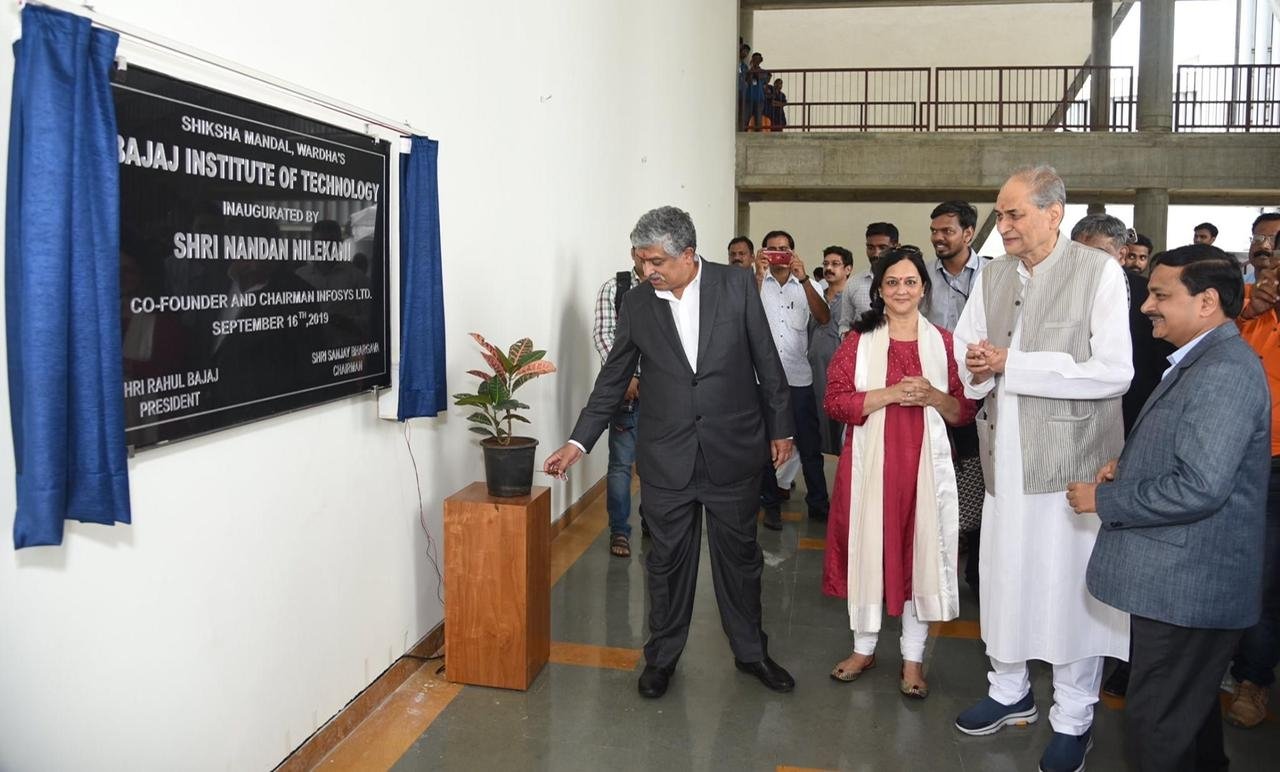 It was Jamnalal Bajaj, Rahul Bajaj’s grandfather, who had invited Mahatma Gandhi to Wardha. The Bajaj family has reshaped the village and put it on the world map. Seen above: Rahul Bajaj with Nandan Nilekani of Infosys, who inaugurated the Bajaj Institute of Technology in 2019; it was Rahul Bajaj’s last visit to Wardha. (IANS photo)
WARDHA (IANS) – Although Rahul Bajaj was born in Kolkata, he spent his childhood in and around Wardha in Maharashtra and till the very end, the octogenarian industrialist, who lived in Pune, cherished the connection that his family had with Wardha and kept the Gandhian flame alive.

Chairman Emeritus of the Bajaj Group, Rahul Bajaj, who passed away at the age of 83 after prolonged illness in Pune, had last visited Wardha in Sept. 2019. After that, first the Covid pandemic induced lockdown and then his health prevented his visits.

The Bajaj family is singularly responsible for taking the then obscure village of Wardha, and of course, Sevagram near it, to the world map. It was Jamnalal Bajaj, Rahul Bajaj’s grandfather, who had invited Mahatma Gandhi to Wardha. Gandhi made Segaon, later renamed as Sevagram, in the neighbourhood his base for freedom movement and also for the vast work in rural development.

Apart from donating more than 2,000 acres of land to various organisations, including that for Gandhiji’s Sevagram Ashram, and for another freedom fighter and spiritual giant Vinoba Bhave’s Pawnar Ashram, the family initiated and is still involved in multiple organisations that carry out constructive works.

These include Charkha Sangh, Gauseva Sangh and Shiksha Mandal. The Janaki Devi Bajaj Grameen Vikas Sanstha is headquartered in Pune, but carries out rural development work in 200 villages in Wardha district.

“Rahul Bajaj’s father Kamal Nayan Bajaj spent a lot of time with Vinoba Bhave. And therefore, much of Rahul Bajaj’s childhood was spent around Pawnar and Sevagram Ashram before the family shifted to Mumbai,” said Karuna Futane, President of the Gram Seva Mandal at Gopuri, Wardha.

“But first due the lockdown and later because of his health issues, he did not visit Wardha for the past two years. Otherwise, Rahul ji visited at least once every year and took out time for looking after all the organisations that are run by the Bajaj group here,” said Sanjay Bhargava, Chairman of the Shiksha Mandal, Wardha.

Started 108 years ago, Shiksha Mandal is the parent body that runs seven colleges in Wardha, and one each in Nagpur and Jabalpur (all parts of the erstwhile Central Province and Berar state).

“That is the unique quality of Bajajs, and Rahul Bajaj rightly followed that legacy. They gave land, money and even their life for Gandhian work. But they never even became trustees of any of the organisations,” said Futane.

Bajajs were the zamindars of Wardha and almost half or more of today’s Wardha city was once owned by them. The family’s enclave — called Bajaj Wadi — is the place where all the family members regularly gathered for Diwali till 2005.

A.R. Tiwari from Jamnalal Sons’ office, who had known Rahul Bajaj for 52 years, spoke about the continued legacy of Gandhian values that he followed.

“Be it any institution in Wardha, he will always be forthcoming to help in any which way. Even when the lockdown happened, he ensured that the needy were given grains,” he said.

The Bajaj family had built a beautiful Laxmi Narayan Mandir 110 years ago. It was then that the temple was opened for Harijans too. Relatively recently, that is about 20 years ago, Rahul Bajaj donated land for two more places of worship in Wardha, one a Geetai Mandir and another a Boudhdha Stupa.

The Geetai Mandir was possibly his tribute to his childhood spent at Pawnar.

“The Geetai Mandir is open to the sky and has verses from ‘Geetai’, Vinoba Bhave’s interpretation of Bhagavad Gita,” said Madhavi Vyas, a journalist based out of Wardha.

Explaining how Rahul Bajaj was instrumental in taking forward the legacy of the work done in the field of education, Bhargava said, “The Science Centre, Wardha, a one-of-its-kind-institution in Vidarbha, was started by him in 2007. Children from Class 5 onwards get hands-on learning there.”

In 2017, the family started an engineering college, Bajaj Institute of Technology. Once the construction of the entire campus was completed, Rahul Bajaj accompanied Nandan Nilekani of Infosys, who inaugurated the college on September 26, 2019. That was his last visit to Wardha.

“With institutions such as Science Centre and Bajaj Institute of Technology, Rahul Bajaj ensured that not just with Wardha’s past, but he would remain connected with Wardha’s future too,” Bhargava added.